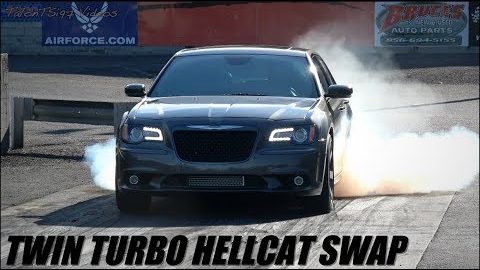 While growing up you probably heard the phrase that you “shouldn’t judge a book by it’s cover.” In life, that’s certainly a valuable piece of advice and we think that it’s also incredibly valuable even when you make your way to the drag strip. These days, with how creative people are getting, you really don’t know what is out there that is going to pack a heavy punch. It could be something that you expect like a Dodge Challenger Hellcat or something that you wouldn’t like a big boat of a Chrysler 300c, not that a 300 is necessarily the slowest thing out there but let’s be honest when we say that nobody expects these things to set the world on fire on the drag strip.

This time, it looks like somebody has taken advantage of such a vehicle’s reputation to be a kind of quick luxury cruiser and instead of just rolling around in the streets in style with a little bit of power decided to turn up the volume knob a little bit on this car’s performance, taking what we knew about such a car and replacing it with a lot more muscle. Under the hood, this time, is none other than a modified power plant from a Hellcat that has been paired with a set of turbos to make things even more interesting.

In the video below, you’ll catch the action from the TalonTSi97 YouTube channel as he follows along with this indescript sedan that really makes it its job to plow down the quarter mile in a hurry. When everything is said and done and the dust finally settles, the car cracks home a personal best of 10.11-seconds in the quarter at 145mph. We’re also left with promises that the machine is going to come back even faster next year!

« Ken Block’s Gymkhana TEN: Behind The Build Of The Hoonitruck