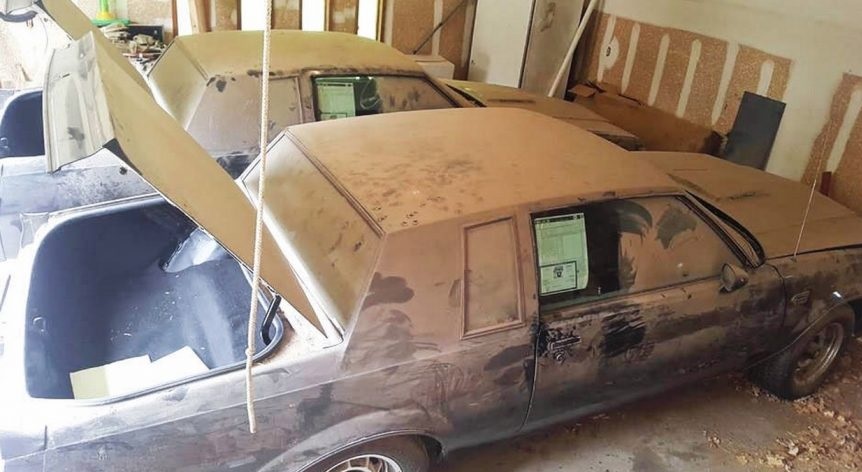 According to the story on the Barnfinds website, this pair of Buick Grand Nationals was purchased new in 1987 and almost immediately parked in the owners garage. After nearly 30 years, the eccentric owner decided it was time to sell the cars, so he posted them on Facebook for $200,000.

While the price kept tire kickers at bay, the story itself drew the attention of Grand National fanatic William and his buddy Shawn, who actually had the cash to make the purchase. The owner required some ridiculous hoop-jumping for the pair to even come look at the cars, but they were finally allowed access to the pair, which they’ve since dubbed “The Twins”, thanks to their identical appearance and sequential VIN numbers.

After inspecting the cars, Shawn deemed the price too high, and he and William left, but not before making an offer on the pair. The owner declined at the time and the deal seemed destined to fall through, but when Shawn called to withdraw his after – after finding a Mustang he wanted to purchase – the Twins’ owner decided to let them go for the price Shawn had offered.

So, the pair headed to pick up the duo, but not without one last bit of drama. As William and Shawn gave the cars one final look, to make sure nothing had been changed since their last visit, the owner became agitated and told them they couldn’t touch the cars until he had his money in-hand. Despite the odd behavior, Shawn went to the bank and made the transfer of funds, securing the addition of two GN’s to his collection.

The cars will be sent off to be brought back to life, and may very well be the only sequentially-numbered pair of GN’s under one roof in the country. They also could be the lowest-mileage pair, with less than 1,400 miles on them COMBINED!

There are barn finds, and then there is THIS! Check Out This Documentary on the Grand National!

« Reviving a Truck That Has Been Sitting at an Abandoned School For 9 Years IN THE SNOW!