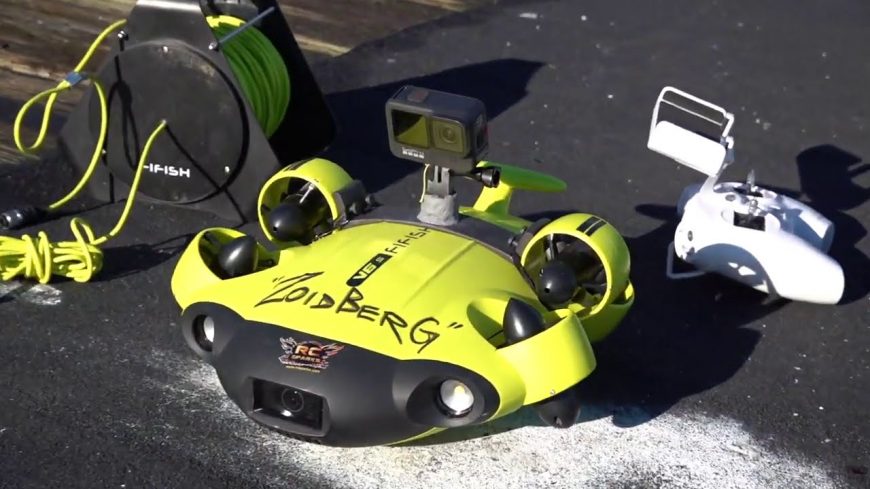 It’s pretty neat how, as technology advances, more and more becomes available to the general consumer. For example, driving around in an underwater drone of sorts with a camera attached to the front would have been something pretty crazy years ago. It was probably reserved for those who had a ton of money or special access like that of the military.

These days, though, technology is advancing at such a rapid pace that all sorts of neat toys end up falling into the hands of the general public. This time, we check out a machine that has a GoPro attached to the top and is designed to explore wherever its user might want it to go.

The operator of the machine takes it under a dock to see what they can find. On the journey, the camera captures all sorts of underwater wildlife. It’s pretty neat to watch as the fish don’t pay much mind to “Zoidberg” as it navigates the water.

Eventually, though, the main event is discovered as the machinery stumbles upon a sunken speedboat. The neat part of this all is the mystery behind it as we don’t really know where the boat came from or how long it had been sitting there. Instead, we are left to use our reasoning to try and figure out the backstory of such a vessel.

By following along with the video below, we get a sense of exploration that we can’t help but love. Watching a video like this really is one way to make us want to spend a ton of money. After tuning in with such a video, we can’t help but wonder what’s out there for us to explore for ourselves. Who knows how many boats are lurking under the surface of the water, patiently waiting to be explored!?

« This Brian O’Conner Replica Skyline Might be One of Our Favorite Fast and Furious Reps to Date!