V12 Detroit 2 Stroke Cold Start Might Be The Best Sound Ever! 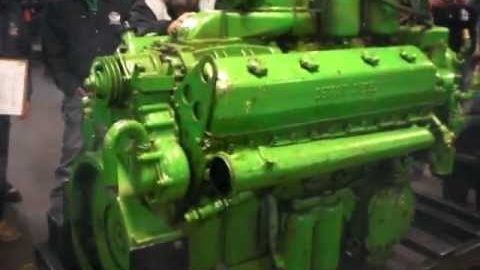 When it comes to engines, there are so many different combinations that have a certain mystique that goes alongside them. For some, they enjoy the way that an engine looks when it comes together and sits in the engine bay, others might focus on the power and torque that an engine is able to efficiently make and sometimes, well, I think that many of us can’t help but be incredibly impressed by the sound that comes from certain engine combinations.

There’s just something about these aspects that could come together to make an all too appealing machine come to life.

This time, we check out the likes of a v12 Detroit two stroke that might be one of the most massive engines that you’ll come across on the web today as it towers over anything you’d find in your standard car or truck. To get straight to the point, this diesel engine is an absolute beast. If the size alert doesn’t impress you as this diesel engine fires up, the sound coming from within will surely make you curious enough to look a little bit deeper into what exactly this thing is capable of as its presence is something that is truly impressive and imposing alike.

If you check out the video below, you’ll be able to get a better idea of exactly how massive something like this is and, how just by being near it, you can really feel the engine’s presence as a powerful machine. After you’re able to see the engine with your own two eyes and listen to it, be sure to tell us what you think of this thing and, if you had such a machine in your possession, what you would plop it under the hood of. I’d be willing to bet this thing makes some serious torque, almost enough to turn the entire world on its axis!

« Clash Of The Titans: Dodge Demon Vs Ford GT – Half Mile Throwdown