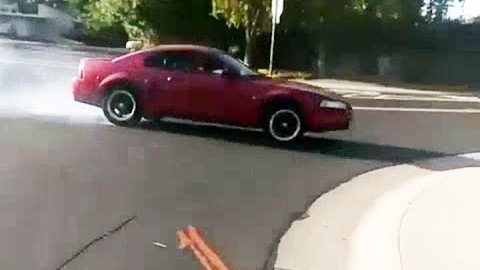 For those who have ever wondered why exactly it is that insurance rates are higher for younger drivers, a big part of the equation is their ability to make rational decisions being substantially less advanced. They say that the brain fully matures around the age of 25 and until then, you’re probably going to be paying through the nose for insurance on your ride. Some folks might think of this as unfair because there are a lot of younger drivers who are incredibly responsible. However, I’m sure the insurance companies have their reasoning behind proceeding with caution when it comes to these drivers.

In this one, we see precisely that situation unfolding right in front of our eyes. For this youngster, apparently, the goal at hand was the head into an intersection and do a couple of donuts. Now, I’m not sure what exactly it was that encouraged him to do the donuts in the middle of an intersection instead of somewhere like a parking lot where there’s nothing to hit but that’s the situation that we’ve been presented with. By now, you probably have a good idea of how exactly this whole thing is about to go awry and if not, buckle up.

It appears as if one of this young man’s friends was filming the entire thing which could’ve provoked him to push even harder. However, as the V6 Ford Mustang would struggle to break the tires loose, it appeared as if the car struggled with a great deal of understeer. Don’t get me wrong, I’m not encouraging this behavior in any car, but this one just didn’t seem to have the power to make the goal work.

It would be too late by the time that the driver noticed the understeer and it finally bit him in the rear end, launching the car straight into a tree. After the incident, the driver removed himself from the car, seemingly unmaimed, however, that’s going to be quite the sticky situation to clean up.