A couple of weeks ago, as Street Car Takeover would invade Atlanta, there were ...

A couple of weeks ago, as Street Car Takeover would invade Atlanta, there were definitely a lot of cars on the premises worthy of admiration. However, even in this sea of impressive machines, it was pretty hard to not notice the bright orange fifth-generation SRT Viper built by the powerhouse, Vengeance Racing. I mean, with the car like this, it would be hard to not stop and take a look at a factory version of the machine, let alone one that is clad with a very aggressive drag set up as far as wheels and tires go along with a nice little note that came from the car once a twin turbo setup was fired up and left to scream. When the people who stopped to take a look saw what the vehicle was capable of, even more jaws probably dropped and stuck to the floor as that sound isn’t just for vanity.

This actually isn’t the first time that we have featured this SRT machine instead, have once previously talked about the car that was kind of an oddball of the group as it was created by an LSX shop, in Vengeance, when one customer came to their doorstep and basically demanded that they take this platform on. As the story would go, at first, the shop seemed kind of hesitant to take on the build but after digging into it and having a long discussion with the owner of the shop, Ron Mowen, one thing snowballed into another and before we knew it, we would venture to say that all parties involved are absolutely happy that they came together because it’s out there setting some wild records as it lights the world on fire!

If you follow along down in the video below, you’ll be able to check out the gen five machine as it manages to snatch up a personal best in the 9s, this was, of course, before the car was able to rocket to the 8s with ease shortly after! 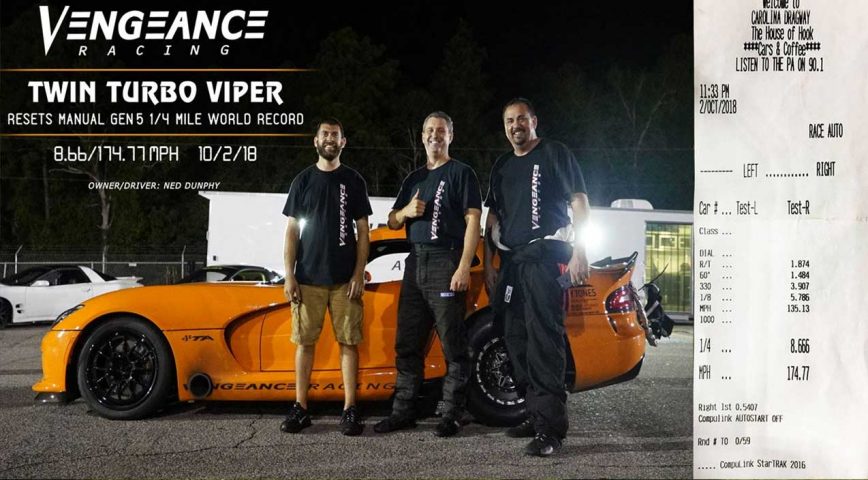