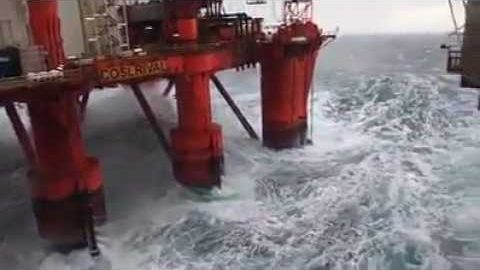 With mother nature, you really never know what’s going to happen. Sure, we have come up with some pretty good metrics to be able to predict what might come about based on past trends, but none of these measuring systems and formulas that are designed to be able to see what’s going to happen in future are ever 100% correct. Even though some of them might be very good, no human is truly able to be able to figure out what’s to come when it comes to all of the different measures of strength that mother nature is able to throw at manmade creations.

This time, we head out in the ocean to check out something that’s pretty crazy, to say the least. With those predictions that show how the ocean may act during a tough storm, oil rigs have been built to withstand some pretty wild waves. However, even though they’ve been constructed to be able to handle some of the worst conditions, that doesn’t necessarily mean that the people on board are going to go into their duties with a keen sense of fearlessness. Seeing some of those waves rise can definitely make your stomach drop as they get higher and higher.

If you follow along down in the video below, you’ll be able to see the action for yourself, watching as the waves rise up high and reach what the person behind the videos says to be about 50 feet. It had to be pretty crazy standing there watching the water crash with all of its fury as it gets closer and closer to the deck that these people are standing on. We would think that being on a job like that has to be something that’s incredibly nerve-racking and watching a video like this gives you an all-new appreciation for what those guys and gals are out there doing.