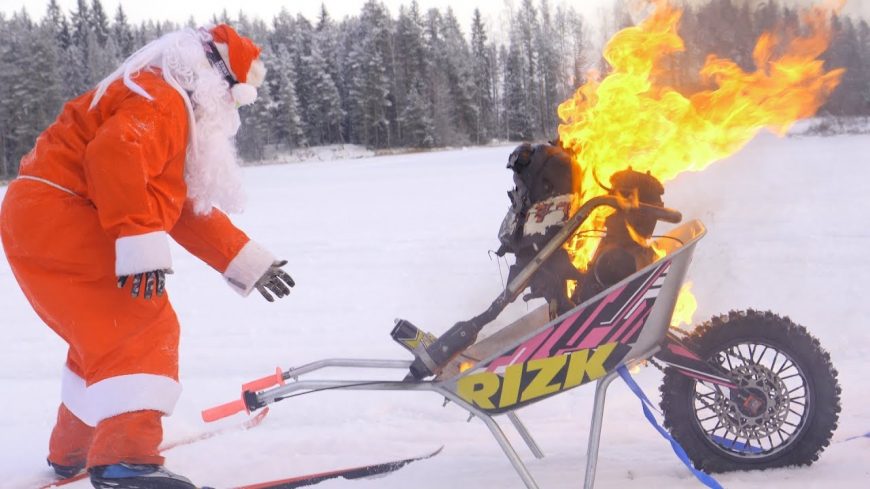 If you’re talking about things that are going fast, there is no shortage of surprises in this area. If you think that we’re talking about some sort of car that is unexpected and ends up packing a heavy punch, think again because it gets way crazier than the things that you see regularly at the drag strip when we’re talking about different platforms that people use for performance. It seems like gearheads will go to the ends of the earth in order to come up with something interesting, even if it means using some of the most random items that they may even have laying around their garage. When you take a look at some of these things, you might not be able to process how it all came together, so if you can’t, that’s okay.

If you follow along here, you’ll be able to join in on display by those who they call the Stunt Freaks Team. Normally, we’re used to these guys pulling off crazy stunts on motorcycles but this time, we get to see a whole different side of them that I’m not sure too many fans even knew existed. Instead of the two-wheeled debauchery that we are used to watch it go down, this time, it’s none other than a wheelbarrow that ends up taking on the action. That sounds like something that’s almost a little bit too cartoonish to be true, that’s probably because it is, but that doesn’t stop these guys from figuring out a way to make it come to life anyway. Oh yeah, and they find a way to get good old Santa Claus involved in the action, too!

If you follow along with the video below, you’ll get the opportunity to check out how exactly somebody can take something like a run-of-the-mill gardening tool and use it to satisfy that need for speed. I’m honestly not sure where these guys think up some of this stuff but as a spectator, I have to admit that it’s a whole lot of fun to be able to watch it unfold in our laps.