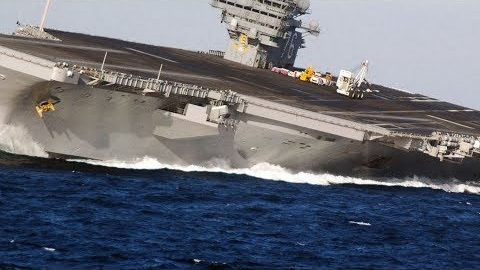 Leave it up to the greatest military on the planet to build a city-sized ship that can handle like a sports car!

The USS Abraham Lincoln, a Nimitz-class aircraft carrier in the US Navy’s fleet of vessels, recently underwent a drastic overhaul that saw the ship’s nuclear reactor powerplant inspected and refueled, as well as a top-to-bottom makeover and modernization that brought the ship, originally launched in 1988, up to 2017 standards. As part of the refueling and overhaul process, the massive ship was sent out to sea to conduct seaworthiness exercises that included the extreme maneuvers you see in the video below.

This part of the seaworthiness exercises are what are called “extreme rudder tests”, putting the ship through the tightest turns possible at full power. As you can see in the photos and the video itself, the ship leans hard under it’s own weight as the man at the helm whips the controls back and forth, but it never appears in danger of rolling onto its side, a true testament to the perfect balance in the ships design and construction.

The single aircraft on the deck of the ship looks almost lost atop the monstrous vessel, but seems impervious to the insane maneuvers. It’s hard to say if a whole fleet of planes would change the balance of the ship and cause it to handle differently, but we have to assume that was factored into the design and wouldn’t be a problem for the hulking carrier. When the seaworthiness trials are completed, the USS Abraham Lincoln will return to duty with the rest of its fleet mates, carrying out the duties of the Navy around the world. As always, we say a sincere thanks to the men and women past, present and future who make the sacrifices necessary to defend our nation and provide us the freedoms we enjoy in the greatest nation in the world.

« Is Titanium Really That Strong? Hydraulic Press Puts it to the Test!