No Prep racing has become a huge draw in the racing world, both in terms of racers ...

No Prep racing has become a huge draw in the racing world, both in terms of racers and spectators. Tracks all around the country are getting in on the no prep action by hosting weekends where the track prep tractor is parked in the back of the staging lanes, used only to clean up after fluids are spilled on the track.

One such facility that’s getting in on the trend is Ozark Raceway Park in Rogersville Missouri. The facility played host to come pretty quick rides that came out, as well as a host of locals looking to take their shot at the big names that showed up. One of the most obvious heavy hitters was the Mistress 2.0 of Shawn Wilhoit, a car and name that may sound familiar to fans of Street Outlaws. There are also a couple of blown pro mod style cars, including a wicked ’57 Chevy, a gorgeous ’63 split window Corvette, and a flamed Studebaker.

The highlight of the video though is the wheelstanding Vega that doesn’t seem to want to go straight, but still manages to go rounds. In the first round, the car left hard but pulled hard toward the centerline, causing the flagger to do a little dance avoid the car hitting him. The second round it went toward the centerline again, but not quite so far. However, the blown ‘Vette was out on him and drove away to take the win.

In the finals, Wilhoit lines up with the blown Corvette, both cars having mowed down the competition to reach the final frame. Both cars left hard and straight, but Wilhoit and The Mistress’ top end charge prevailed, sending him to the winner’s circle! This was some great no-prep action, and it’s easy to see why it’s such a hit with the fans. It’s a certainty that Ozark Raceway Park will be looking to add more no prep events to their calendar soon after such a great turnout for this one!

Wild Big Tire Camaro Crash, Out of the Groove and into the Wall 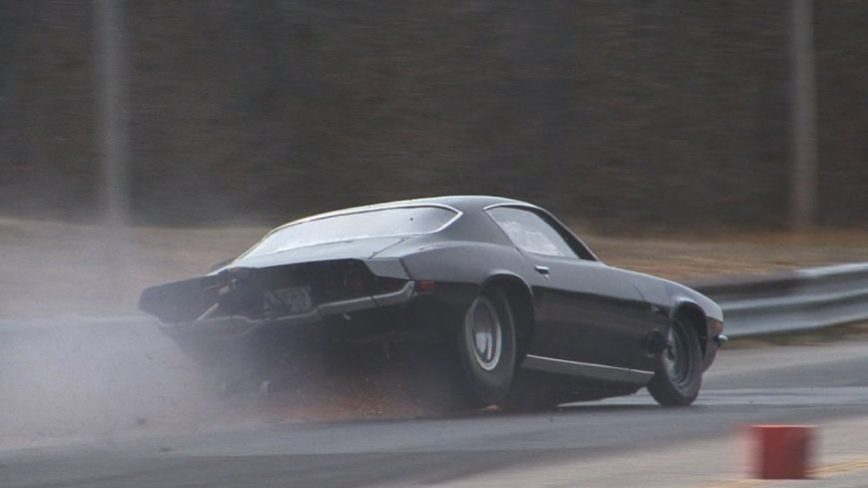