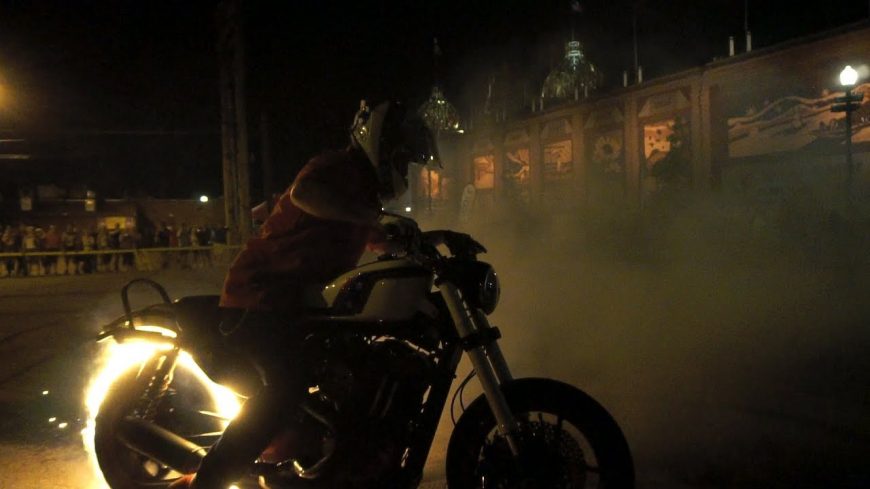 To many people, Evel Knievel was their hero. Evel was an outlaw biker that they grew up watching jump just about anything on his beloved Harley at venues from California to London. Evel had no fear, whether it was attempting to jump the Caesars Palace fountains, a jump that almost killed him, or the Snake River Canyon, which also almost killed him, it just didn’t matter. Evel just wanted to put on a show for his fans, with his signature Red, white, and blue leathers, a style he adopted from fellow superstar showman Elvis Presley.

For years after Evel stopped jumping, the world didn’t have a daredevil on a motorcycle until a whole new genra, Freestyle Motocross, came to be thanks to the X Games. These guys were doing death- and gravity-defying tricks on dirt bikes, catching ridiculous air, and when a man named Travis Pastrana started throwing back flips, it completely changed the game. The sport grew to a point that even Travis, literally one of FMX’s founding fathers, doesn’t compete anymore, opting instead to tour with his insane stunt show, The Nitro Circus, selling out stadiums around the world.

Today we have Cole Freeman, the modern day outlaw biker who just loves to ride. Cole has been jumping his Harley’s for a number of years now, but things have been escalating. Jumping anything from busses to hay bales all across the nation. Cole just loves to have fun, and he brings along his crew of outlaw bikers, known as “Ill Conduct”, a group of stunt riders who throw down stunts on street bikes, and Harley’s while setting up for Cole’s big jumps.

In this video we see Cole on his 1000 lb Harley Davidson road glide. Yes, that’s right, a bagger, a big heavy bike you would normally see cruising the highway on a cross country road trip. Cole jumps a bunch of hay bales, and in typical fashion, things get a little sketchy. Riding in true Evel style without the aid of a speedometer, Cole has to take his best guess at his approach speed. He comes in a little too hot, overshooting his landing by a few feet, which results in a hard impact that sends the bike crashing through the plywood ramp. But Cole has the skill and presence of mind to keep the bike under control and upright and avoids a Knievelesque tumble. The total distance for the jump is 99 feet, resetting Freeman’s own Road Glide jump record and cementing his place as the modern king of the outlaw stuntmen!