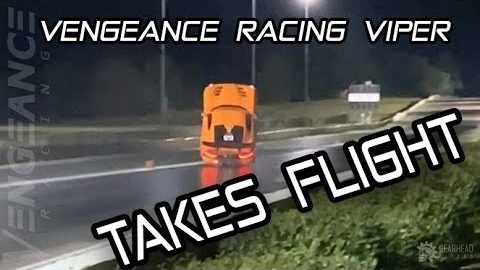 A couple of months ago, we got up close and personal with the Vengeance Racing built SRT Viper that couldn’t help but leave everybody’s jaw on the floor. With Ned Dunphy behind the wheel, the combo is nothing short of amazing. In fact, the car boasts an entire sheet of records that it holds for the platform. It’s not too often that we see a machine that holds the automatic and manual record at the same time. This combo has done just that, though!

This is the Viper that went viral when the owner absolutely refused to take it anywhere but Vengeance Racing who, at the time, primarily focused on the LS engine. These days, Vengeance has opened its doors to all sorts of other platforms, arguably in part due to this build. We’re certainly happy to see it because they have hit their marks with flying colors just as we’ve seen them do with the LS platform. It almost seems like everything that the company touches turns to gold but I digress.

This time, we follow the crew and the Viper down to a place known as the “House of Hook.”

Hook is certainly what the track did as this incredible machine made its way down the lanes. Ned says that they were simply working on the combination and doing a little bit of fine tuning. The crew has been looking to eek every last bit of potential out of the build.

In this one, with the high horsepower machine and the place that is notorious for traction, the car managed to hook pretty well. Perhaps, it might’ve even hooked a little bit too well. The power definitely made its way to the ground as the front end of the car ended up lifting off of the racing surface. Things actually got rather scary as Viper was almost sent into orbit.

It took us a moment to catch our breath after Ned took flight! All four tires went into the air as the Viper seemed to skate along on the back bumper. It was a great relief to see the car touch down on all fours. In turn, the machine did make it back on the trailer under its own power and Ned seems to be alright.

« Heres Why The Toyota FJ Cruiser Should Make a Come Back.