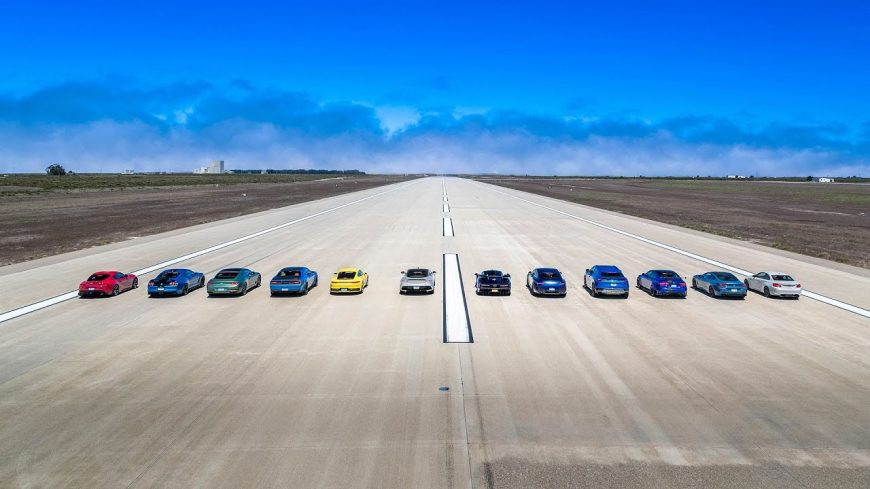 If there’s one race that we wouldn’t miss, it’s the regular installments of World’s Greatest Drag Race. The premise is simple. In what looks more like a scene out of a movie than a real-life comparison, MotorTrend will put some of the latest and greatest automobiles up against one another.

This isn’t just any comparison, though. Instead of a normal head-to-head comparison, this showdown stacks a whole collection of cars against one another at the same time. This time, they collect 12 of the hottest cars on the market and chuck them all out on the runway at Vandenberg Air Force Base at the same time.

As usual, the machines are as epic as it gets.

Combined, the machines make almost 7000 horsepower. The average of the bunch is 579. The cars are also pretty different in their scope. Some of them are designed to do certain tasks better than others. Perhaps, some of these cars are best for taking the corners on the track. Others might be designed to lug around your groceries. However, in this one, they’re all going at a pair of stacked drag races.

Now, when it comes to their drag racing ability, obviously, we can expect each of them to be strong in different portions of the race. While some of the machines are designed to get off the line quickly, others have outrageous top speeds. Just because certain cars have the best 0-60 time isn’t to say they’ll reign supreme. Even though automakers like to shove that metric down our throats, it won’t have so much bearing in a long-distance sprint.

So, who is going to take home the win? Tune in below to see both the quarter-mile and half-mile sprints.

« Video Shows Off Most Expensive Abandoned Cars Left Behind