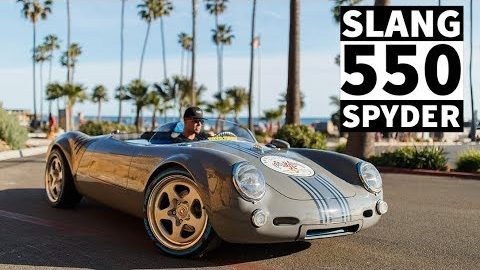 In-car culture, there is one theme that many builds share. When somebody is in the garage spending long hours of wrenching, they’re going to want it to pay off with something special. Many times, this means a one-of-a-kind touch that really makes a vehicle stand out. Let’s just say that some builds really take this whole “one-of-a-kind” idea to heart.

In the world of unique automobiles, look no further than this particular Porsche Spyder to embody the one-of-one theme. The old school convertible is nothing short of a classic. On the outside, It looks like a piece of history. However, the body is about where the classic nature of this old school Porsche stops. From head to toe, every component seems to have been tweaked or replaced. It really feels like the builder wanted to make this one his own.

Over on the Hoonigan Autofocus YouTube channel, we get to check in with the car that might make purists a little bit uncomfortable. That’s just how we like it, though!

Under the hood of this Porsche, we find something that happens to be rather unconventional. Instead of Porsche power, the vehicle is moving along thanks to a little bit of oomph from a 2.0L flat 4 that would otherwise be found in a 2002-2005 Subaru WRX.

If that’s not enough to really get your interest going, once the hood is popped open, we think that just about everybody would be impressed. Even after the engine swap, this thing has pretty much everything custom. From the wiring harness to the piping and even the color coatings, everything has its place, almost like it came from the factory that way. However, the plot twist is that nothing here came from the factory, of course.

By following along with the video below, we get to really deep dive into the build. This is one that words simply would never be able to do justice for. Therefore, we recommend checking it out for yourself.