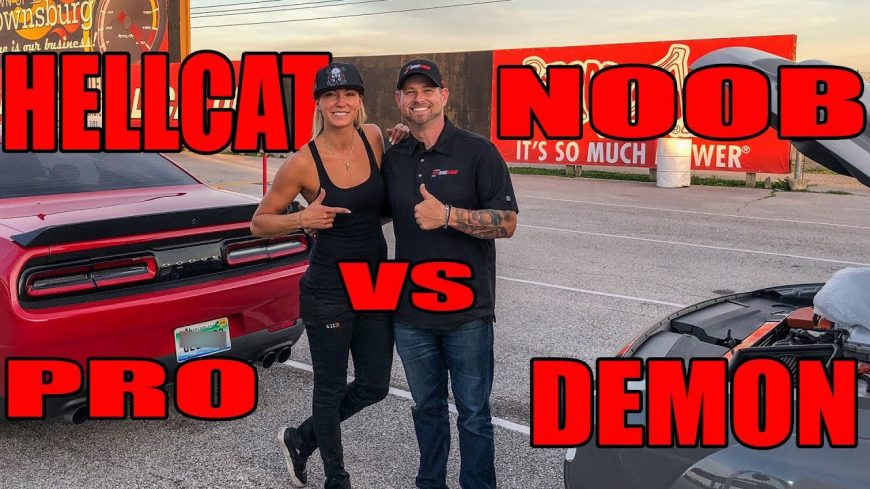 It’s no secret that Team Speed Society driver Leah Pritchett’s top fuel dragster is sponsored by Mopar/Dodge, and she was right there on the stage when the Challenger SRT Demon was revealed to the public for the very first time. However, what a lot of people are not aware of is that Pritchett was deeply involved in the cars pre-production testing, making countless laps down the quarter mile in the car as Dodge engineers worked to extract every ounce of performance from the massive blown HEMI powerplant and the drag-specific suspension.

In fact, when Dodge published the car’s record-smashing quarter mile numbers, it was Pritchett behind the wheel of the car when it laid down the insane 9.65 elapsed time. She and SRT engineer Jim Wilder had been going back and forth as the crew refined the car’s tune, knocking off a hundredth here and a hundredth there, and it was Leah who was behind the wheel in Gainesville, FL that fateful day when the quickest run was made. Needless to say, she’s intimately familiar with the car and knows how to extract the most from it.

So it should come as no surprise that when YouTuber SRTMUSH, whose modified Demon is one of the quickest and most-watched Demon on YouTube, made the trip up to Leah’s hometown of Indianapolis, she was able to run quicker than Mush himself. And not just a little bit quicker, as you’ll see in the video.

After lining up beside Leah in her own Hellcat, which is stock except for the awesome LP series wheels from Centerline (look closely at her car and see if you notice anything about the wheels) and experiencing some top end antics from the car, Mush lets DSR funny car ace Matt Hagan take his car down the track. Hagan also has the car get loose on him, so he shuts down early, but Leah keeps her foot planted for the full 1320 and lays down an awesome 9.47 elapsed time, more than three tenths of a second quicker than the next quickest pass of the day.

Once Mush gets the issue that was causing the car to lose power at the top end sorted out, the car should be even closer to dipping into the heralded 8-second zone, but he may have to get Leah back behind the wheel to make it happen.