As we have seen with online content producers before, when a lot of eyes find their ...

As we have seen with online content producers before, when a lot of eyes find their work, sometimes, among those eyes are the wrong sets of eyes.

For automotive YouTuber, StreetSpeed717, that was exactly the case, as he explained in one of his recent videos.

Those who have been following along with the channel have likely seen him having his way with a brand new Ram TRX. These trucks that are going to cost buyers at least $90,000 have been a hot ticket item. However, our host has decided to put one through the wringer, absolutely beating the life out of it and eventually setting it on fire.

To viewers and our host alike, it appeared, for all intents and purposes, as if all of these actions were in line with rules and regulations. Sure, if we browse the comment section, we’re sure to find more than just a couple of people who were a little bit bitter about the truck being destroyed. However, legally, we would’ve been hard-pressed to find anything wrong with these videos, especially given the fact that they were recorded on private property.

However, it seems as if the Pennsylvania Fish and Boat Commission had a different opinion.

Shoutout to The Drive as their leg work was able to show what people previously charged similarly ended up dealing with. They tell us, “Other individuals who were previously convicted under these laws have been ordered to pay civil damages, resulting in restitution to the Commonwealth for damage to fish, commercial resale value, the replacement cost of fish based on the angling value, and more.”

In the video below, we get to hear all about it from our host, himself, as he defends his case, as he tries to defend his case!

Dude Sets Brand New $93,000 Ram TRX on Fire After Beating the Life Out of It 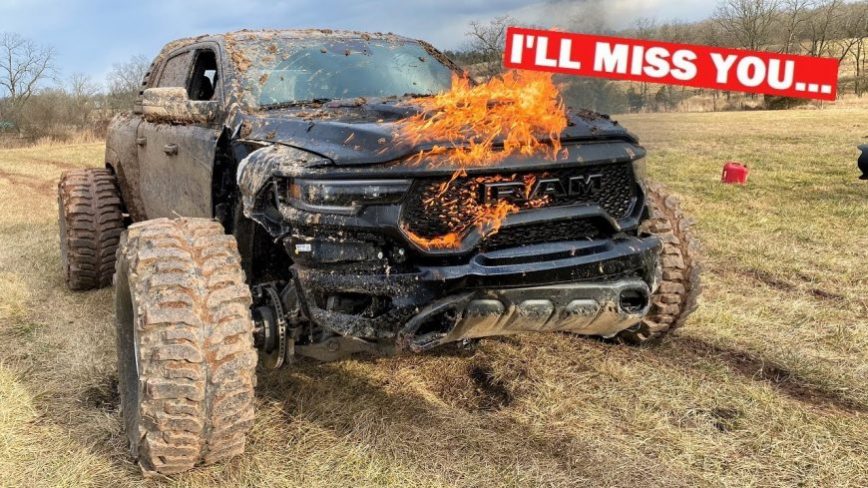