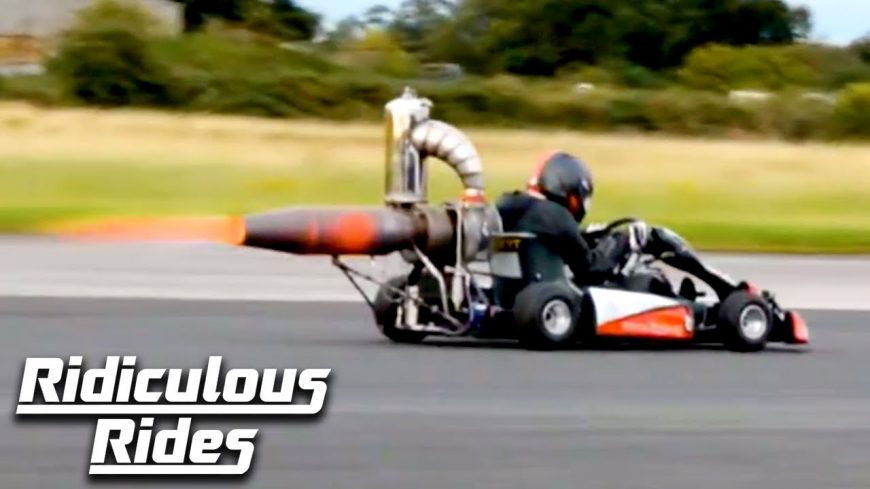 The formula for speed is rather simple at its core. Sure, there are lots of other small tweaks and factors to consider. However, when it comes right down to it, the three most important factors to going fast are power, weight, and traction. More or less, if somebody gets all three of these correct, their ride should perform its heart out.

This time, we check out a rig that is definitely built for speed and has all three of these things down pat. Off the bat, we can eliminate traction from the equation immediately. As this go-kart is powered by a jet engine, the propulsion from the engine isn’t powering the wheels. Instead, it’s just pushing the kart along like a plane.

From there, we head to the weight category. I don’t think that it necessarily takes an engineer or any sort of a genius to understand that a go-kart frame like this is probably about as lightweight as it’s going to get. These things have really been known to rip with the right power plant.

This naturally transitions us into the previously mentioned jet engine. When all is said and done, the propulsion is enough to make this monster of a machine power its way to over 100 mph. In something this small, just imagine what it feels like going that quick near the ground.

By following along with the video below from Barcroft Cars, we get to see this amazing creation in action. Just when we thought that this was the type of thing that only happened in cartoons, this jet-powered go-kart comes to life. The best part of it all is that the machine was created entirely in the creator’s own personal shed.

We aren’t sure about you but we would love to take on this sketchy creation with a full head of steam. Who else is getting behind the wheel?