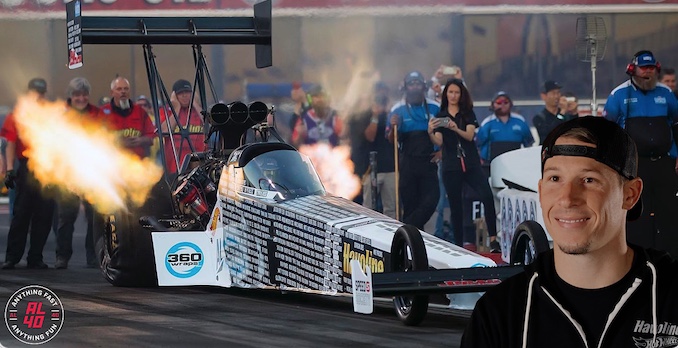 Last year, Alex Laughlin’s Pro Mod season would be cut short. After his race team at Elite Motorsports decided to park Alex’s Pro Mod and program indefinitely, Laughlin would be left without a ride… or so he thought. As Alex is quite the hustler, he decided that he wouldn’t let this speed bump get in his way of continuing to compete and fulfilling sponsor obligations so he was able to quickly find his way into a  Top Fuel ride and the rest was history as he would round out the 2021 season behind the wheel of one of the most powerful classes in all of racing.

This left fans wondering what this meant for the 2022 season and beyond.

Officially, Laughlin will find his way to the Pro Stock competition once again. The four-time NHRA national event winner will kick off the season in a Pro Stock ride for the first two races of the 2022 Campin World Drag Racing Series. The first stop will be the Winternationals in Pomona, California where Laughlin will sport Powerbuilt as a primary sponsor on the Prusiensky Racing Dodge Dart Pro Stock machine.

From there, Alex will resume competition in his Top Fuel machine with Scott Palmer as the program is set to debut in the third race of the season in Gainesville, Georgia. After that, the team will. run a limited schedule with about a dozen races on the docket so far.

As far as the Pro Stock opportunity goes, Laughlin says that Alan Prusiensky approached him, asking if he would be interested in the opportunity to compete in the year’s first two events. He then says that he made a call to Powerbuilt and the company was “In from the start.” Laughlin credits the company with standing by him through what some might call a bit of a rollercoaster ride over the last three years.

In a statement to Drag Illustrated, Powerbuilt CEO, Greg Livingston, spoke highly of Laughlin, saying “He is a valued ambassador for the Powerbuilt brand both on and off the track. Not only does he promote the wide range of products Powerbuilt has to offer, he also has a genuine interest in our innovative products and is a real, frequent user of many of them. It’s going to be another exciting year with Alex and we wish him the best of luck!”