This past weekend, the NHRA would head to Pomona and the action was intense for ...

This past weekend, the NHRA would head to Pomona and the action was intense for the Auto Club NHRA Finals. As drivers looked to finish off the season strong and maybe even go home with a championship, there was certainly a lot going on to grab one’s attention.

One of the rides that made its way down the strip had quite a unique story behind it and probably had some fans wondering. As one can tell by looking at the car, Alex Laughlin did have several big name sponsors. However, in order to put together a little bit more money to compete at the event, Laughlin would bring back what he calls the Power of the People campaign.

Essentially, the idea is to crowd-fund the racing machine.

For a small fee starting at $100, fans would be able to buy a section of the race car to have their name on the top fuel dragster as it headed down the track to speeds that surpassed 300 mph. As if that wasn’t enough, each fan who participated is going to take home a bag of goodies with one of the treats being a poster of the car autographed by Laughlin along with the decal of their name attached to it. As Laughlin puts it, it will give fans the opportunity to have an actual piece of the machine that was featured on the nationally televised event.

Down below, Alex speaks to all of the support along with informing us all that all 500+ who participated will have had their name on the car that had achieved a new personal best for Laughlin as the machine made its way down the track to the tune of 3.759 seconds at 324 mph, setting the E/T and top speed records.

If you didn’t get a chance to get in on this effort this time, we would keep an eye out. While it hasn’t quite been confirmed just yet, we wouldn’t be shocked to see Laughlin doing this again in the future due to his great success with enlisting support! 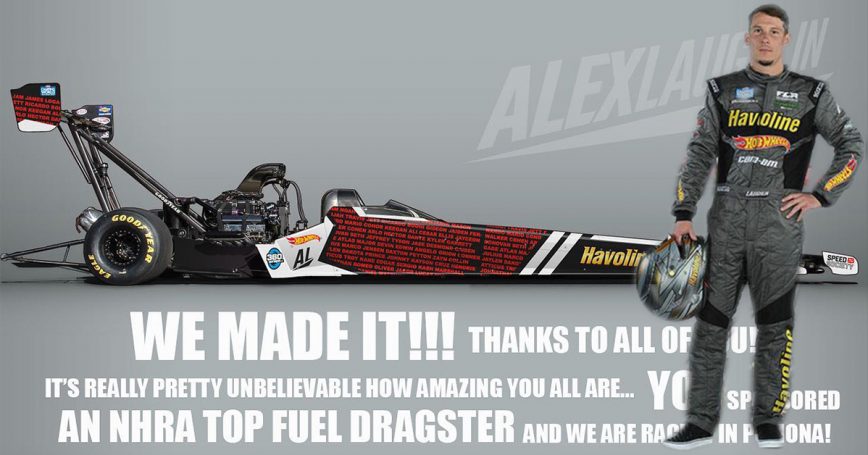