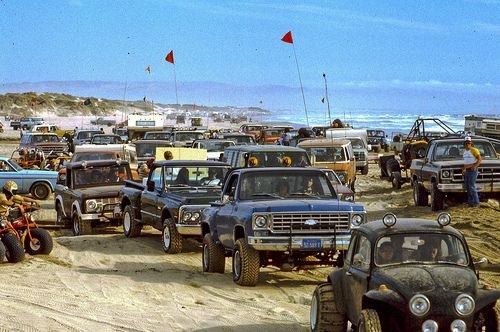 California is making something else illegal but at this point, are we really surprised?

One of the biggest draws of state parks is being able to endlessly explore. Naturally, this piece of information comes in unison with the idea that the easiest way to explore such a vast expanse of land is with some sort of vehicle.

Currently, as it applies to California, there is only one state park remaining that allows for recreational driving on the beach and in the sand dunes. For those who have never been, driving on the beach or dunes is an absolutely great time to be able to head out, enjoy nature, and maybe cook something up on the grill. However, California is calling it quits as they will be moving to restrict vehicles in the Oceano Dunes area by 2024.

The move comes from the California Coastal Commission that has voted to end this off-highway vehicle use at the dunes and on the beach. Sources say that this decision has been on the heels of decades of debate over different “Environmental and cultural impacts.” There’s a balance here to be found somewhere between being able to appreciate nature and destroying it. Unfortunately, it’s something that not everybody is going to agree upon when any ruling is put in place.

Articles about the situation point out that the primary use of the space is from people who drive their vehicles on the beach and in the dunes. There are other uses for the park. However, this seems to be a measure that will massively cut back on the number of people who will be interested in using it.

The decision comes because the commission says that they have found that driving in the area has “Degraded dune habitats, harmed native species, caused air quality in public health issues, and made other uses such as swimming and walking difficult.”

Fox 40 California quoted Jeff Miller, a conservation advocate at the Nonprofit Center for Biological Diversity, who said the effort will also “Reduce greenhouse gasses and dust pollution.” What would California legislation be without shoehorning something about greenhouse gases into it, after all?

In addition to changing the use of the state park, owners of businesses nearby who rent out off-road vehicles will almost undoubtedly be forced to close because of this decision. We’re sure that they won’t be the only ones to suffer, either.

The original Fox 40 report points out that the managing director of the California off-road vehicle association, Amy Granat, had some criticism for the move. In an email to The Associated Press, she stated “State Parks does an outstanding job serving all Californians, balancing recreation with the highest standards of environmental stewardship. Yesterday State Parks was demeaned and their incredible efforts at Oceano Dunes SVRA were trivialized and misrepresented.”

« The Pawn Stars Explain to Trike Owner That He Got Fleeced