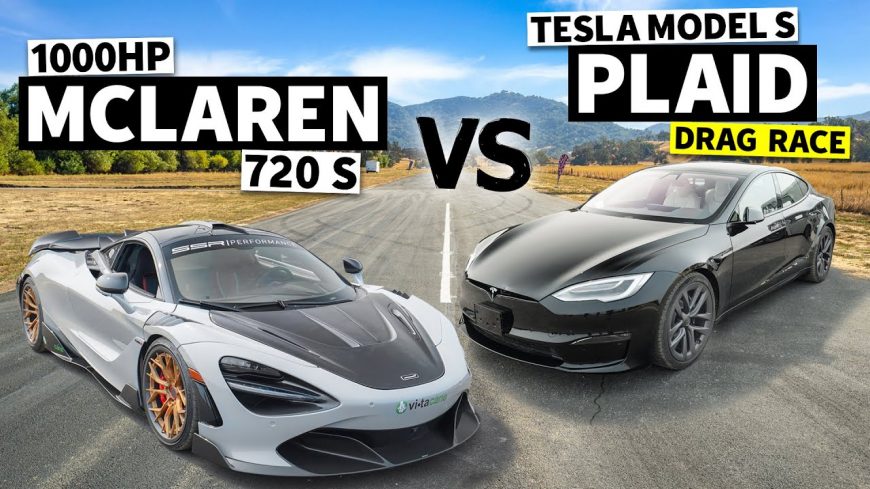 There is a pretty crazy trend that has been coming to life over the last couple of years. Ever since Tesla released the Model S, we have seen the electric car do some pretty wild things. However, a more recent top dog has emerged as a higher performance trim level of the Model S has come to life.

For those who have yet to be acquainted with the Tesla Model S Plaid, this thing is a monster. The all-electric sedan creates 1020 hp and over 1000 pound-feet of torque as well. When push comes to shove, the 4766 lb electric machine is good for a low nine-second quarter-mile pass down the drag strip, straight out of the box. It’s also accompanied by quarter-mile trap speeds of over 150 mph.

Naturally, the comparisons that everybody seems to want to make are between the Model S Plaid and top-level street machines. Naturally, with all-wheel-drive and electric power that provides instantaneous and consistent torque delivery, the Plaid has a stout advantage in a drag race. There certainly has to be something out there that’s able to compete, though. Right?

This time, the folks over at Hoonigan were able to source a Model S Plaid owner who was willing to put his sedan up against a 1000 hp McLaren 720S. This twin turbomachine isn’t just any McLaren but instead, one that’s really going to throw you back in the seat.

By following along with the video down below, we get to see how the 3100-pound gasoline-powered vehicle is able to contend with the electric vehicle that is 1600 pounds heavier.

While it is easy to be impressed by the offering that Tesla is bringing to the table, this is also just the beginning of the electric revolution. Only time will tell just how quick these things will be moving in the future.