When we take a look around at all of the objects that we use on a regular basis, ...

When we take a look around at all of the objects that we use on a regular basis, it’s kind of crazy to see how long some things have remained the same. In the scheme of things, just about everything that we use is constantly evolving. Even the phones in our pockets have a new rendition every other year to get consumers to buy the latest technology.

However, on the flip side of things, there are definitely some inventions that have remained so successful over the years that they just work because of how simple they are. For example, there’s a reason why the saying goes “There’s no need to reinvent the wheel.”

On the other hand, though, not everybody agrees that this old saying about the wheel is necessarily true. Instead, those with a little bit more of a mechanical inclination might feel the need to take a look into the wheel to see if it’s as efficient as it could possibly be. Perhaps, somewhere in the equation, there is something that could be tweaked or improved just a little bit to really go a long way.

This time, we kind of, sort of, check-in with somebody who did take it upon themselves to reinvent the wheel.

The subject of discussion here is a typical bicycle wheel. However, after a little bit of tinkering, the wheel really takes a new form. While it still does have a circular shape and the same general structure, the spokes have been removed and an outer ring has been fixed to the wheel so that the bicycle rides on bearings, creating a hubless design.

Is the design perfect? Well, I’m definitely no engineer. However, what I can say is that this is beyond awesome and certain to turn heads no matter where it goes.

Hubless Chopper With An Airplane Engine. A Wicked Bike Without Rims that Rides!! 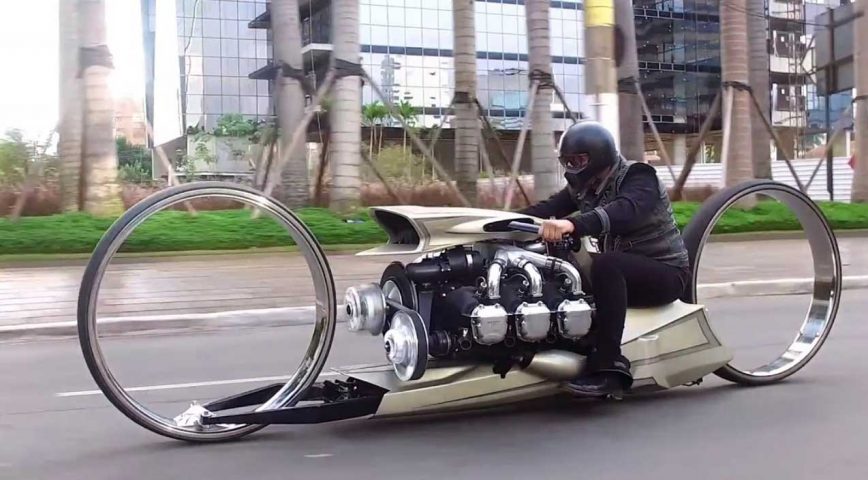