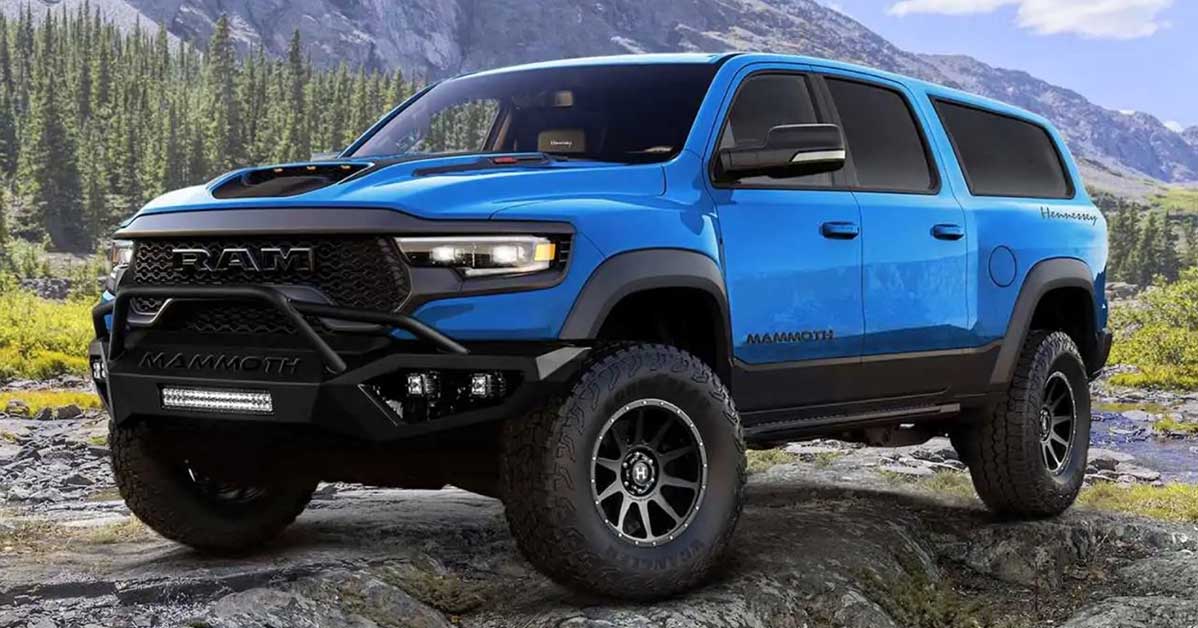 When ram decided to take its full-size pickup truck and slap Hellcat power under the hood, it was definitely something that made the eyes of enthusiasts pop. With over 700 hp on tap and an off-road suspension that encourages drivers to take this thing wherever there is no pavement, the machine just looks like a blast to play in. However, as powerful as this thing is, providing more than 250 hp over its next closest competitor, we enthusiasts have gotten to modifying the platform right away.

With companies like Hennessey, we would watch the truck as it was transformed into a 1000 hp monster with the likes of the Mammoth package.

This time, though, we check out a truck that takes things even further with the TRX. Let’s just say that those who want to haul around the whole family are going to have a great time doing it with that same 1000 hp architecture. This time, we check in with the limited-run Mammoth SUV.

Via Hennessey, “Boasting 1,012 hp from its supercharged 6.2-liter V8 and capable of 0-60 mph in a supercar slaying 3.2 seconds, the new SUV can seat seven adults in comfort and is guaranteed to be exclusive with just 20 models being produced

Based on the new Ram TRX, the enhancement by Hennessey Performance sees bespoke bodywork extend the roofline to meet a new C-pillar that sits above the rear taillights. The bespoke conversion incorporates a sizable rear-side window and adds a rear screen while retaining excellent luggage space behind the third row of seats.”

John Hennessey, the owner of Hennessey Performance, has 5 kids and says that he has always enjoyed the concept of a big and powerful SUV. In fact, he recalls the Velociraptor, the Ford Raptor that Hennessey turned into an SUV, and says that he still owns one to this day.

In order to bring the truck up to speed, “Hennessey engineers upgrade the supercharger system alongside new HPE engine calibration. This sees power output jump 310 hp to 1,012 hp while torque is boosted by 319 lb-ft to a truly mammoth 969 lb-ft of torque.”

Now comes the heartbreaking part. Most folks are probably going to have a little trouble swinging this thing as it will come in at $375,000. However, with only 20 units produced, we get a feeling that they’ll be going fast! This thing might be in the running for the coolest SUV ever created!

« 30 of the Biggest Ship Collisions and Mistakes Caught on Camera