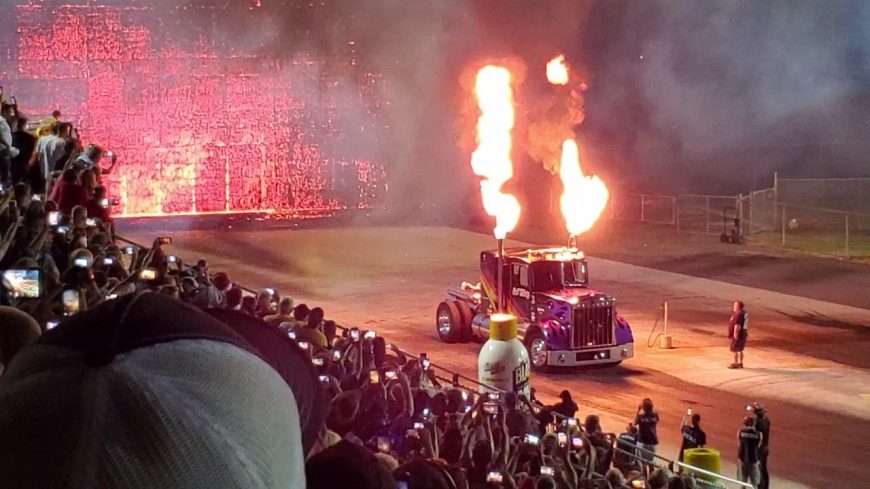 As somebody who once made a foolish mistake of standing behind a jet-powered vehicle while it started up, I can definitely say this is an idea that you’re going to want to avoid. In my own personal experience, shortly after this vehicle started up, even standing a couple of hundred feet from the vehicle, the crowd went scattering a different direction as the heat began to rain down on everybody.

Therefore, we would imagine that it’s a particularly bad idea to start up a jet powered truck within just a couple of feet of something that might be flammable. This time, we check out a video from Summit Motorsports Park back in 2019 when a jet powered big rig ended up attempting to make a pass down the strip. Apparently, the first time that it made its exhibition run, the truck managed to blacken the boards a little bit. The second time around, the truck stood to finish the job!

At first, we thought that maybe this might have been intentional. Maybe the park was ready to buy a new billboard and let the old one go down in style. However, upon taking a second look, it does look a little bit dangerous! It’s pretty scary, actually, to watch the entire advertising board behind the track go up in flames! A brisk wind is definitely sending chunks of flaming advertisement flying absolutely everywhere, should it happen to come.

One commenter by the name of Andrew Henson does point out that Bob Motz, the man behind the wheel, setting the board on fire is a yearly occurence.

When push came to shove, the billboard was taken out and it was a calm night so it doesn’t look like anybody was injured in the process. One thing is for sure and it’s that everyone on location ended up getting one heck of a show at the strip that night. There might be an angry track manager waiting in the wings after a display like this, though!