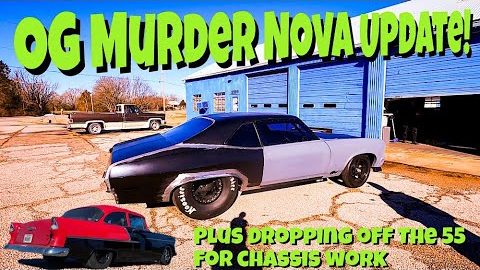 Sometimes, it can be important to just stop and smell the roses. While things in life might seem stagnant sometimes, looking at the way that they used to be can show us just how far we’ve really come. This concept is especially apparent for those who are into cars and especially those who race them.

For example, from the early days of Street Outlaws, competitors have definitely stepped up their game substantially. The machines that we see on the streets share very little, if anything, with the cars that were originally competing in list races. However, that isn’t to say that all of the competitors have completely gotten rid of the cars that made them famous in the first place.

This time, Shawn is making a couple of changes to the OG Murder Nova. While making these changes, he’s taking us on a walk down memory lane, talking about the way that the car used to be and all of the changes that have come along the way. In the process, we also get to see the exciting new innovations that are making the original Nova a much more capable machine than what it used to be. While the car has changed roles and isn’t the star of the show anymore, it’s still something that we can really appreciate. In fact, the simplicity almost makes us appreciate it even more.

By following along with the video below, we get to tune in with 187 Customs on YouTube. There’s nothing like a little bit of a garage hang and an update on a project to really get us in the racing mood. In addition to talking about the OG Murder Nova, we also get a little bit of an update on Shawn’s 55 that’s being taken into the shop for some chassis work.