As a passenger in an airplane, it would be tough to keep your cool under crazy ...

As a passenger in an airplane, it would be tough to keep your cool under crazy conditions. It’s tough to even imagine the feeling that would come over us if something like a landing gear were to fail. Now, just imagine that crazy feeling except you’re the one behind the controls, responsible for that airplane making it to the ground.

For one pilot who was flying near Phoenix, Arizona, last month, exactly that terrifying situation would come to life. For the small aircraft, a failed landing gear would create an interesting scenario where the pilot had to use some information from deep in the handbook to pull out quite the landing.

Luckily, without the tire or the landing gear, the plane would be able to make a smooth landing on its belly at Goodyear Airport. The pilot was accompanied by one other person and both were able to exit the aircraft unhurt.

Emergency crews would wait on the ground for the folks in the plane but they likely didn’t need to hop to action. There are about 100 different scenarios that could have gone wrong here but thankfully, the pilot seemed to be incredibly skilled and had a stroke of luck on his side given the situation.

The video below gives us the opportunity to watch as the airplane comes in and attempts this landing. The pilot expertly manages to lay the plane down to get it to slide across the runway. Being able to touch down is just the first part of the nerve-racking situation. Instead, the more nerve-racking part, at least if you ask us, is making sure that the plane stays upright. It looks like those wings could end up turning it sideways and potentially rolling it over at any time but fortunately, none of that would come to life.

Angry Farmer in a Tractor vs Massive Water Cannon 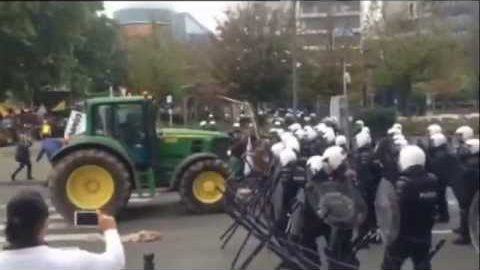