As someone who has created a ton of content on automotive YouTube, there is one thing that I can definitely attest to. Even though we all mess up from time to time, not everybody is willing to show that side of themselves. Therefore, I definitely have to say that I, like many others, have a level of respect for those who are willing to display their shortcomings and even laugh at themselves a little bit.

This time, we check in with somebody who definitely ended up in quite a tough situation. However, even though things completely slid off the rails, they took it in stride, even going so far as uploading the video to the internet.

For anyone who was disgruntled by losing the 10 mm socket, watching something like this makes searching for that socket seem like a dream. We couldn’t help but laugh because this is all too relatable of a situation that I could even personally see me getting into should I have slept on some of the details.

It seems as if the goal here is to remove the engine in question. With a handy engine hoist, the man behind the work seems to be lifting the unit out from the engine bay. However, as he jacks the engine higher and higher, the crane loses stability, eventually tossing the engine to the ground.

Up until this point, everything is bad but things only become more compounded as we see that the rain becomes heavier as the video goes on. This is definitely a testament to how much of a luxury it is to be able to work on a vehicle indoors with tools like a lift.

Things just keep snowballing as eventually, the engine hoist actually ends up under the car sideways, lifting the front end in the air and probably doing some damage in the process. At the end of the day, sometimes, maybe it’s better just to take a little bit of a break and walk away for a while.

Ford's 7.3L Godzilla Gets Turbo'd in a Swapped Mustang! 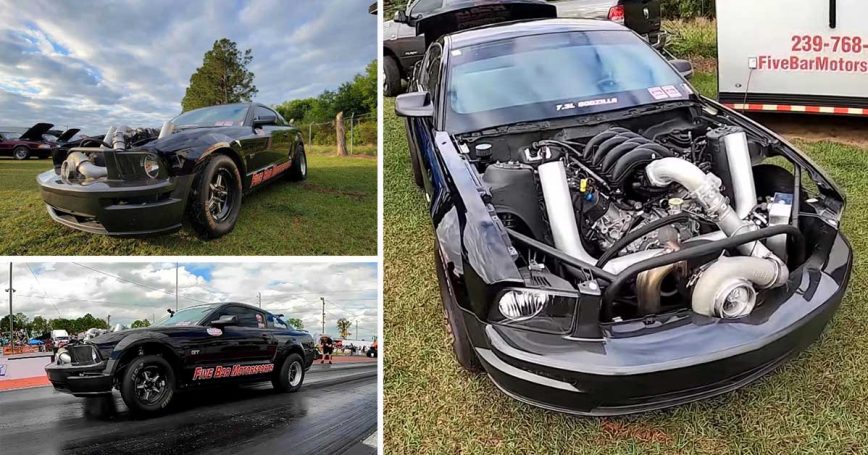