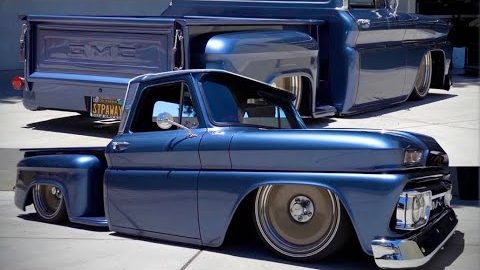 Back in the 1960s when GMC was rolling pickup trucks off of the assembly line, we would venture to think that the brand’s thoughts were a lot different than they are today. Essentially, when today’s featured 1964 GMC C10 first saw the streets, the folks behind the concept were probably thinking about functionality in terms of being a workhorse.

Today, one can find just about any option that they want on a truck but back in the 60s, that simply wasn’t the case. Instead, these things were bare bones basic and designed to carry your junk around. They didn’t exactly offer the bells and whistles that one might find today as modern trucks have everything from heated seats to infotainment systems and just about everything that one might find in a luxury car as well.

This time, though, we check in with one example of a classic C10 that has been brought up to modern standards. Not only has this ride received a variety of modern creature comforts. It also has been treated to the modern heart of a monster.

As the truck has evolved a little bit, this mean machine has found itself a modern GM 6.2L LS3 to make things just a little bit more interesting. Even though the updated engine combo under the hood is operating at factory stock power levels, the 500 hp is certainly a huge wake-up over whatever factory offering was originally under the hood of this pickup truck.

By following along with the video below from AutotopiaLA, we get to take a ride inside of every nook and cranny that really makes this pickup come to life. There’s just something about a custom rig like this that really grabs our attention and keeps us wanting to learn more. The owner says that literally every single piece has been modified in some way aside from the body so it’s definitely a custom ride that keeps the surprises coming.