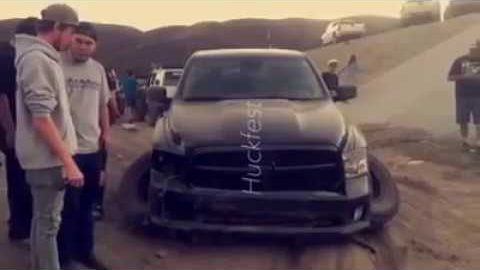 Via the laws of physics, what goes up must come down and this was a lesson that this Dodge owner learned in the hardest way possible as he launched his truck into the air.

The second part of that equation, of course, would be said truck coming back down to Earth and when it finally met the ground, we’re willing to bet that the guy behind the wheel instantly regretted his decision to go after such a jump in first place.

Plenty of spectators watched as the truck met the ground and the suspension all decided to give out at once. Trucks like this simply were not designed to take that kind of beating. The engineers probably had more of a commuter/light workload in mind for this machine.

Check out the video below that shows a complete destruction of the suspension and this guy’s ego in a video that might just make you cringe. It should go without saying that this is something you probably shouldn’t try at home.