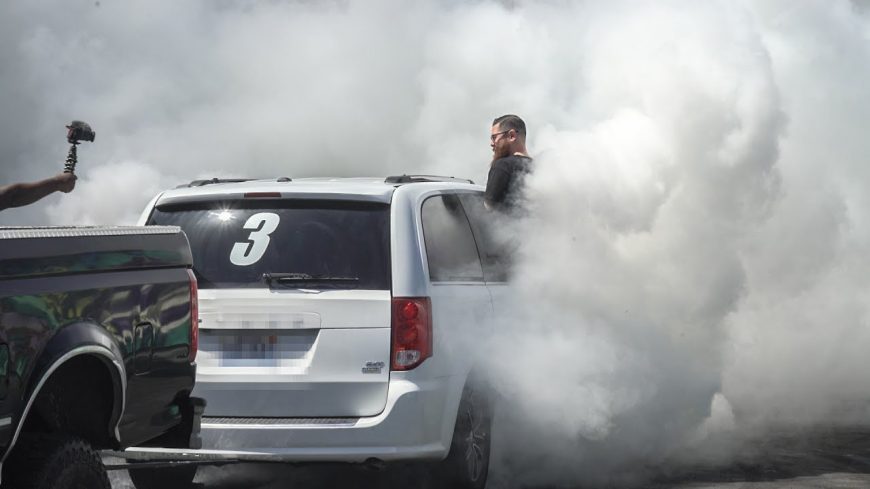 If there is a pairing that goes together well, as well as the iconic duos of history like peanut butter and jelly, for example, that pairing would be Cleetus McFarland and the crew over at Hoonigan. Until now, that collaboration had not been made but on the latest episode of Daily Transmission, we get a little bit of a peek into what happened when the two forces actually did combine for tire shredding madness.

When the “Do it for Dale” figurehead who has built his brand around doing stunts like burnouts that kill entire sets of tires comes together with the company that’s all about doing everything crazy behind the wheel of just about any vehicle, they’re bound to have a good time. This video certainly confirmed that notion as Cleetus came out west to give the guys a visit at the Donut Garage and brought along his handy-dandy rental van.

Now, just because the vehicle didn’t belong to him and it was only a minivan didn’t mean that Cleetus was going to take it easy on this vehicle. Instead, the group took the “kill all tires” mantra to a whole new level by trying out something that they weren’t sure that anyone has done before. That stunt would consist of doing a burnout with cruise control activated. In theory, it could be kind of like having your own automated version of a burnout. It wouldn’t surprise me to see that feature implemented on purpose built drag cars in the very near future.

Check out the video down below that will take you along for the journey as this attempt that’s the first of its kind is unleashed at the Donut Garage. Will this poor minivan be able to stand up to the cruise control abuse or will it fold under the pressure? You can see all that and more down in the video below that attempts to try what had previously been uncharted territory.