$25 Million Yacht Goes up in Massive Ball of Flames 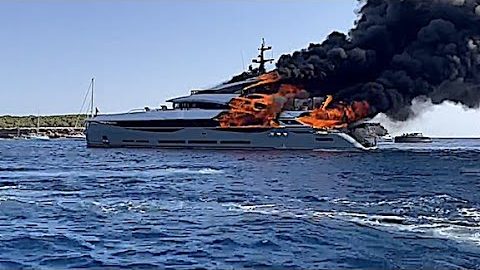 Yacht fans or really anybody who values money might want to shield their eyes from this one. One of the things that we don’t really think about when looking at super expensive mega yachts is how exactly somebody might replace something like this if disaster managed to strike. The insurance on such a vessel has to be absolutely astronomical but in this particular case, that policy will be put to very good use. These very questions thoughts are ones that one yacht owner is going to have to come to terms with after an unfortunate event.

A $25 million super yacht went ablaze between Ibiza and Formentera. Per the report that came alongside the video from YouTube creator, Your World Travel Guide, “Two Maritime Rescue boats have traveled to the coast of Cala Saona, in Formentera, to control a fire that broke out on a 45-meter-long motor yacht, which has been completely destroyed. From the yacht, the ‘Aria SF’, a dense cloud of black smoke rises, perfectly visible from the coast and even from Ibiza.”

The report continues that, while the monetary damage done was immense, all seven individuals who were aboard the boat were able to evacuate before the fire got too intense.

Video showcases the yacht burning into the sea as distress signals were sent to hopefully help distinguish the blaze. From the looks of things, the vessel is likely going to be beyond reasonable repair. The owner of the ship was said to have been somebody in the automotive industry but details about exactly who it was have not been released.

The clip below is definitely one that’s hard to watch but showcases in event that is an incredibly rare occurrence. It’s not every day that we get to watch that much money go up in flames right in front of our very eyes.