We have to admit that we’re suckers for muscle cars of just about any era. Even ...

We have to admit that we’re suckers for muscle cars of just about any era. Even though the classics laid the foundation, today, there are some pretty awesome machines hitting the streets that we can’t help but fall in love with. There are so many cool cars coming out these days that we could drool over for hours as the list goes on and on.

On the other hand, though, it’s so hard to re-capture that vibe that comes with a classic muscle car. While new muscle machines are definitely awesome, they are a whole different animal than something made in the 60s or 70s.

However, just because somebody likes an old school muscle machine doesn’t mean that they have to refrain from mixing it up a little bit. In fact, for those looking for a little bit more speed and efficiency, it’s probably in their best interest to mix things up. While an old school V8 sounds cool and might feel decent to drive, there’s no argument against the fact that new school stuff is going to not only make its power more easily but also probably provide things like better fuel economy as well.

With that, we see all sorts of modern meets classic creations that really make both generations mesh together perfectly!

This time, the canvas in question just so happens to be a 1971 Plymouth Cuda. In order to make this thing go, its creator swapped in the heart of a Hellcat. The engine remains bone stock and is made into a six-speed transmission. The words “bone stock” might’ve been a little bit of sacrilege in tuning culture of years past. However, with monstrous horsepower being made from the supercharged engine from the factory, 707 ponies are definitely enough to make something like this get up and go.

Down in the video below from AutotopiaLA, we get the complete tour of the car along with all of the details that fall in place perfectly and really show us how this old school muscle machine is a true masterpiece. Inside and out, the Cuda looks like nothing short of an absolute showstopper. 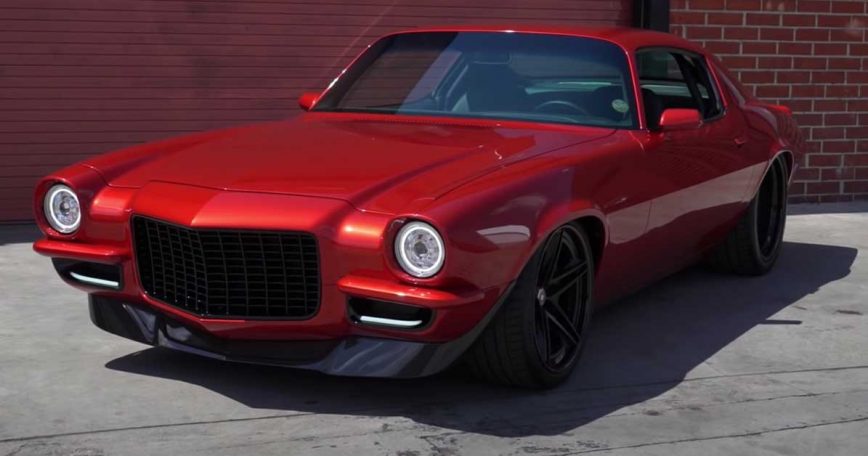