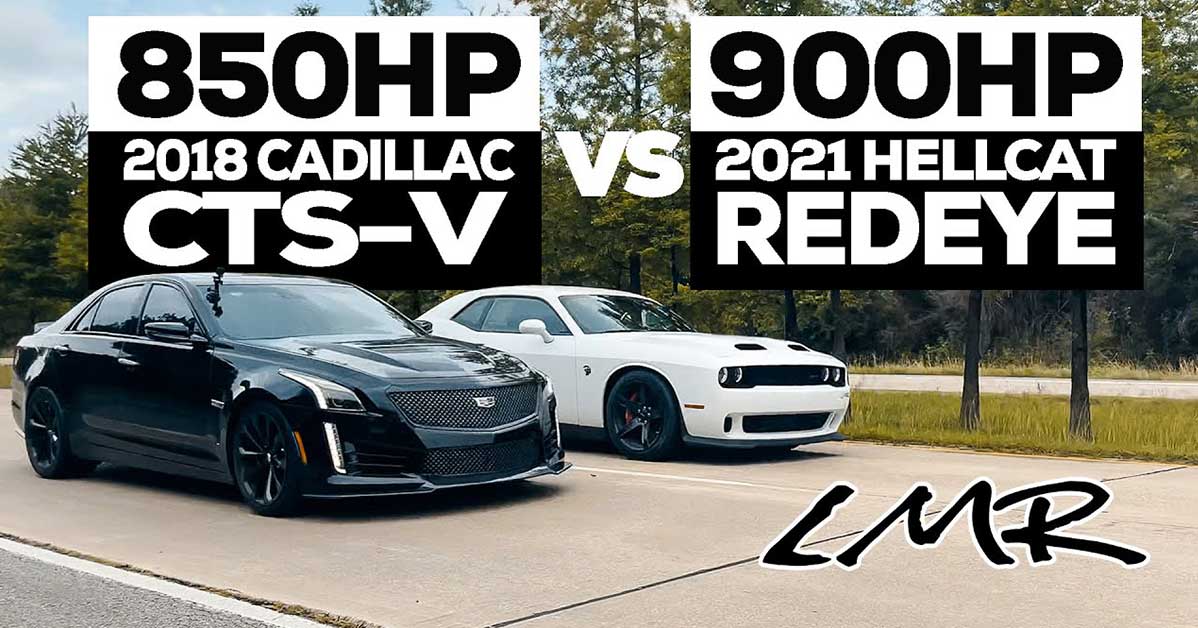 These days, it’s pretty wild to see some of the high horsepower creations that have come straight out of the box.

Across the board, manufacturers have really stepped up their game to create some of the most powerful cars that the market has ever seen. This time, we get a chance to check in with just a couple of these machines that have really made their presence felt.

In one corner, we have the final generation of Cadillac CTS-V. As we know, the CTS-V was Cadillac’s best shot at a performance luxury sedan and it has definitely evolved to a top-tier contender over the years. When all was said and done, the car would create 640 hp which makes for an epic ride. When it comes to luxury performance machines, the CTS-V is definitely one of the monsters of the group.

In the other corner, we have one of the more popular performance machines these days in a 2021 Dodge Challenger Hellcat Redeye. Straight out of the box, the machine makes nearly 800 hp to play with. Both of these cars, by most accounts, should be something that the vast majority of drivers would have their hands full with. In fact, time and time again, drivers of these rides have shown that the cars make too much power for them to handle. However, for some of the madmen among us, even the most potent performance machines just aren’t making quite enough power.

In this one, we tune in with a couple of cars that have been born with more than enough power to suit most people. However, the performance enthusiasts behind these rides decided to kick it up yet another notch.

This time, the CTS-V in question is flirting with 850 hp. In the other lane, the Redeye is creating 900 hp. On paper, it seems like the Redeye might have an edge. However, surprisingly, the luxury sedan still weighs a little bit less. When you throw in things like gearing, this is bound to be a race for the ages. Be sure to check it out in the Late Model Racecraft YouTube video below.

« Shark Tank’s “Mr. Wonderful” Breaks Down if Cars Are a Good Investment