Arkansas Cop Being Sued For Using PIT Maneuver, Flipping Over Pregnant Woman’s Car Who “Pulled Over Too Slowly” 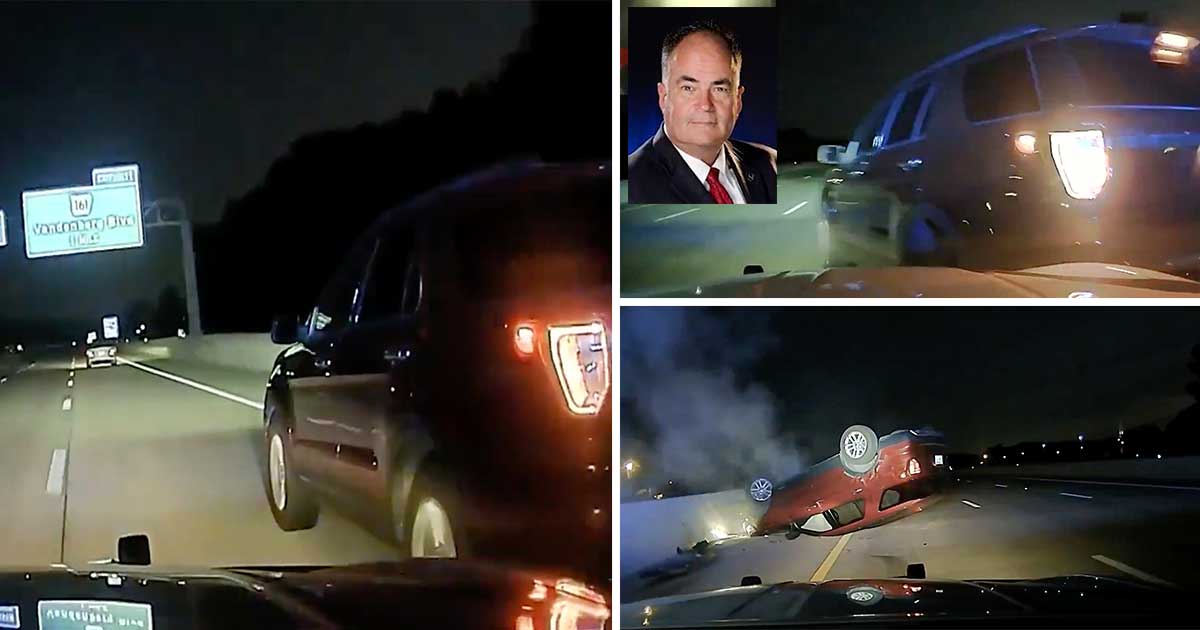 In the line of duty, sometimes, police officers have to make split-second decisions. When his decision is played back on video, it can be questionable but we have to remember that things might be different in the heat of the moment.

We’re not really sure if any of that applies here as it seems to be a relatively cut and dry bad decision but the officer in question seems to have been let off the hook.

Arkansas State Police officer Rodney Dunn is being sued by a woman who claims that the officer flipped her car over for pulling over too slowly. The footage from the police cruiser showcases the incident as the woman appears to slow down after seeing the lights behind her.

Before she had the opportunity to find a place that she deemed safe, though, the officer following her continued to PIT Maneuver the vehicle, rolling it over. At the time, the driver, Nicole Harper, believed that her unborn child might have been killed in the crash according to toofab.

A lawsuit filed by Harper alleges that her vehicle was clocked at 84 mph in a 70 mph zone when the State Trooper activated his lights and siren.

The video shows Harper immediately indicating to the right and decreasing speed before putting on the hazard lights. She was then said to have been looking for a safe place to exit the highway because of the narrow shoulder.

The pursuit lasted for exactly 127 seconds before the police officer did the unthinkable. After slamming into Harper’s vehicle and rolling it over, things only get more disgusting from there.

The following transcript is enough to make just about anyone sick to their stomach:

Casually strolling up to the still smoking wreck, showing no signs he was worried about his own safety or the driver’s, Dunn asks her: “Why didn’t you stop?”

“Because I didn’t feel like it was safe!” the upside down Harper insists. “It didn’t look like there was enough room!”

“Well this is where you ended up,” he replies. “I’ve got plenty of room out here.”

“When people don’t stop for emergency vehicles, we end this right here right now,” he explains. “All you had to do was slow down and stop.”

“I did slow down! I thought I was doing the right thing…. I thought it would be safe to wait for the exit,” she pleads.

“When people don’t stop we have no idea what’s going on inside the vehicle,” the trooper tells her. “When people flee from us… that’s what happens.”

“I wasn’t fleeing!” she responded.

The State Police in the state of Arkansas offer a Driver License Study Guide where the first step when being stopped by law enforcement says to “activate your turn signal or emergency flashers to indicate to the officer that you are seeking a safe place to stop.”

Fortunately, Harper headed to an OBGYN the next day and her baby’s heartbeat was found. The child would be born the following February with perfect health.

Harper still got charged with speeding and failing to yield to an emergency vehicle which is accompanied by a $400 fine.

Meanwhile, as of the writing of this article, Dunn has faced no charges or disciplinary measures.

Ofc. Rodney Dunn flipped a pregnant woman’s car after she didn’t pull over quick enough. It’s CLEARLY not safe for her to stop on a poorly-lit rural road. She did exactly the right thing but this cop was on a power trip! How is he still employed 1 yr later? #EndQualifiedImmunity pic.twitter.com/cpVTaVmERE

« Here’s How They Chose the Fast and Furious Hero Cars