BMW Owner Forced to Pay $5,000 to Neighbors For Being a Nusiance 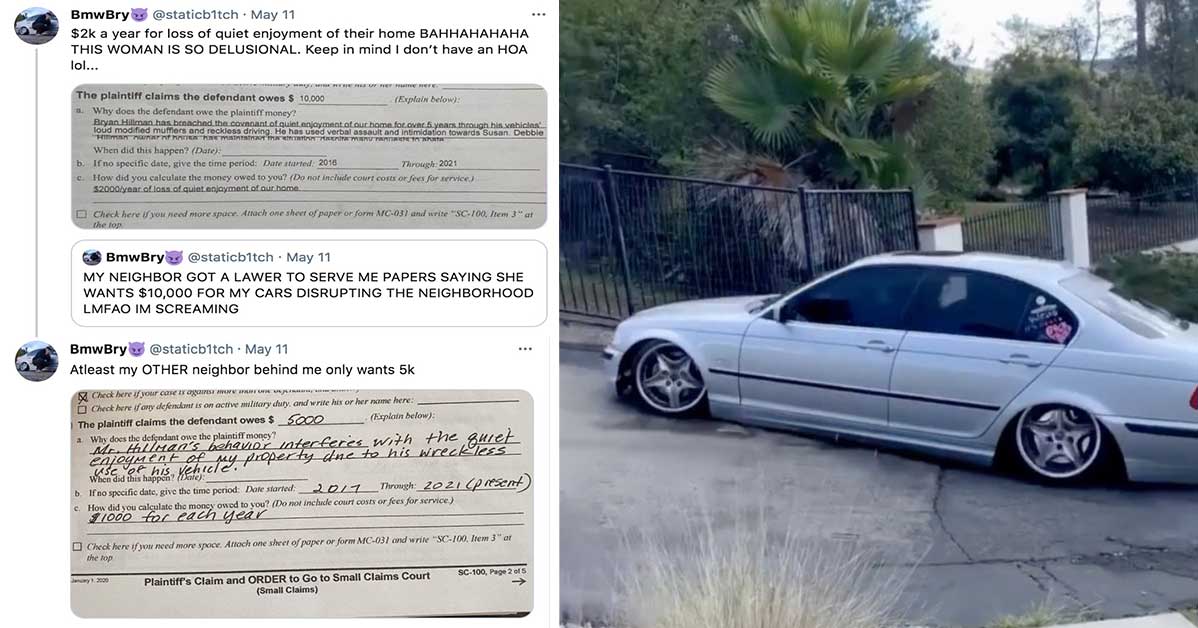 For those who don’t remember, back in May, we ran a story about a BMW owner whose neighborhood was trying to sue him, basically for being obnoxious. It’s really a story that we’ve heard time and time again as angry neighbors seem to hate any car that they perceive as loud. However, there is a line between neighbors being unreasonable and a car enthusiast being wildly inconsiderate.

For this BMW owner that goes by the name of @staticb1tch on Twitter, it seems as if the courts have actually ruled that you can be fined for being obnoxious.

In the original story that was reported by Tire Meets Road, the plaintiffs were attempting to sue Carlsbad, California resident, Brian Hillman, for a combined sum of $15,000.

Another claim sought $5000 in damages, only looking to recoup $1000 per year stating “Mr. Hillman’s behavior interferes with the quiet enjoyment of my property due to his reckless use of his vehicle.”

Claims also say that Hillman attempted to intimidate one homeowner in past interactions using white was called “Verbal assault.”

The publication that originally captured the story claims that most of the social media posts that showed him “ripping donuts or breaking traction” in and around his neighborhood have been set to private or since deleted.

At the time, Hillman was rather vocal on Twitter, seemingly thinking that there was no way that courts would rule against him.

$2k a year for loss of quiet enjoyment of their home BAHHAHAHAHA THIS WOMAN IS SO DELUSIONAL. Keep in mind I don’t have an HOA lol… https://t.co/fKF4euRmh8 pic.twitter.com/dkiPWravPP

As the dust has appeared to settle, though, the BMW owner has been ordered to pay over $5000 to these neighbors.

Tire Meets Road also reports that both cases were eventually heard on the same day. The judge would come to the conclusion in less than 20 minutes that the plaintiffs were to be granted $5000 and $500 respectively. The report also says that Hillman’s mother, who he lives with, was also listed as a defendant in the lawsuit as well. The Hillmans were said to have shelled out $5,914.74 to cover the damages, court costs, and lawyer fees when all was said and done.

In a tweet following the lawsuit, Hillman attempted to show concern for other automotive enthusiasts. Sure, this thing could create some sort of a precedent that would end up harming anyone with a loud car. However, it is also notable that these lawsuits seem to come on the heels of repeated events of loud and aggressive driving in a neighborhood setting. We would probably say that if you can avoid acting like the main character from Tokyo Drift in your neighborhood, you should be fine.

Y’all really fucked the car scene so badly for a story, not considering what comes with that. I payed my dues so fuck em we ball but I feel bad for the next kid that’s gonna have my shit stacked against them as evidence. There’s a reason I never said anything after it was settled

« 6 Step Ladder Tricks and Secrets That Most Never Noticed