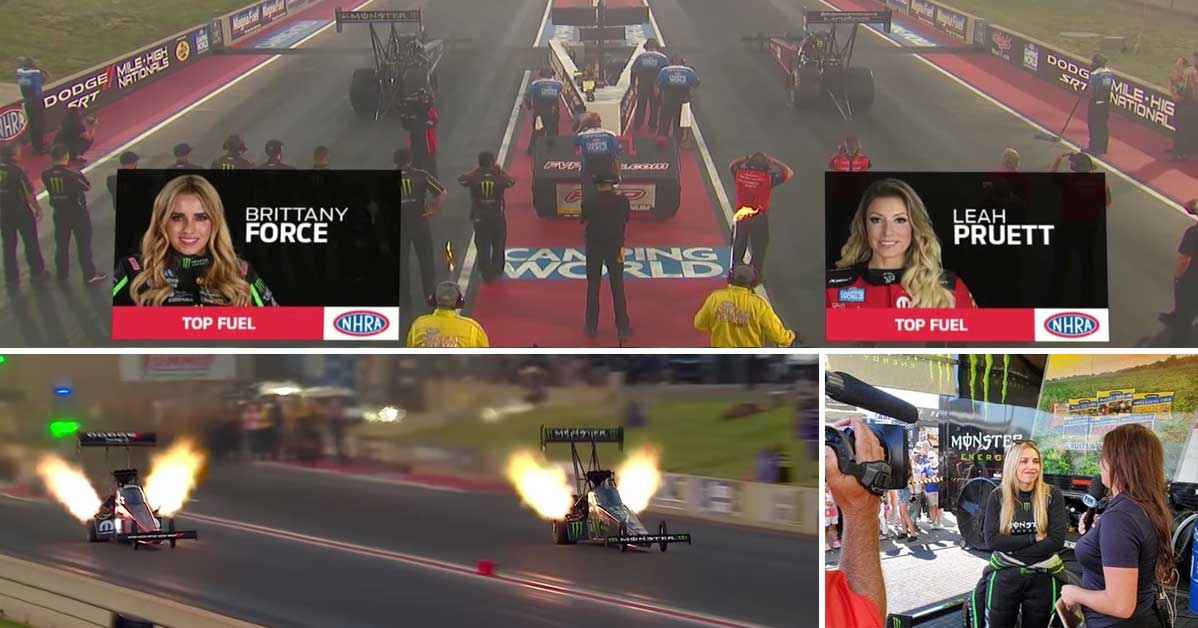 When the throttle drops for an NHRA Top Fuel competition, we never quite know what to expect. There’s really just something special about these cars that rocket to north of 300 mph and dragsters that are pumping out thousands of horsepower – about 11,000 hp to be exact.

Fans in attendance signed up for epic moments including close races and record shattering performances. This past weekend at Bandimere speedway in Denver, Brittany Force would take it upon herself to reset an NHRA record, becoming the quickest to ever make a pass down the Denver race track.

The NHRA recalls, “Brittany Force unleashed the quickest run in the history of Bandimere Speedway on Saturday, rocketing to the No. 1 position in Top Fuel in front of a huge crowd at the Dodge//SRT Mile-High NHRA Nationals presented by Pennzoil.”

“Force, a former Top Fuel world champ, put together a monstrous track-record run of 3.717-seconds at 326.00 mph in her 11,000-horsepower Monster Energy dragster to close out qualifying. That gave Force her third No. 1 qualifier in 2021 and 23rd in her career, as she tries to close in on her first win of the season and also her first victory on Thunder Mountain in Denver.”

Force would make it to the second round of eliminations where she would be outrun by Clay Millican. After Force managed a quicker reaction time, Milican was able to make up the distance in what ended up being nothing short of an epic race. The margin of victory for Millican was 0.0027-seconds, says the NHRA, which is about 15 inches. This is truly the type of race that gets the fans off of their seats.

Steve Torrance would end up going the distance and winning the Top Fuel crown at Mile High, downing Joey Haas in the final round. The NHRA tells us “Haas dropped a cylinder right at the hit and never got it to clean up in the losing effort.”

« There’s Not Much More Head Turning Than The Hubless Motorcycle