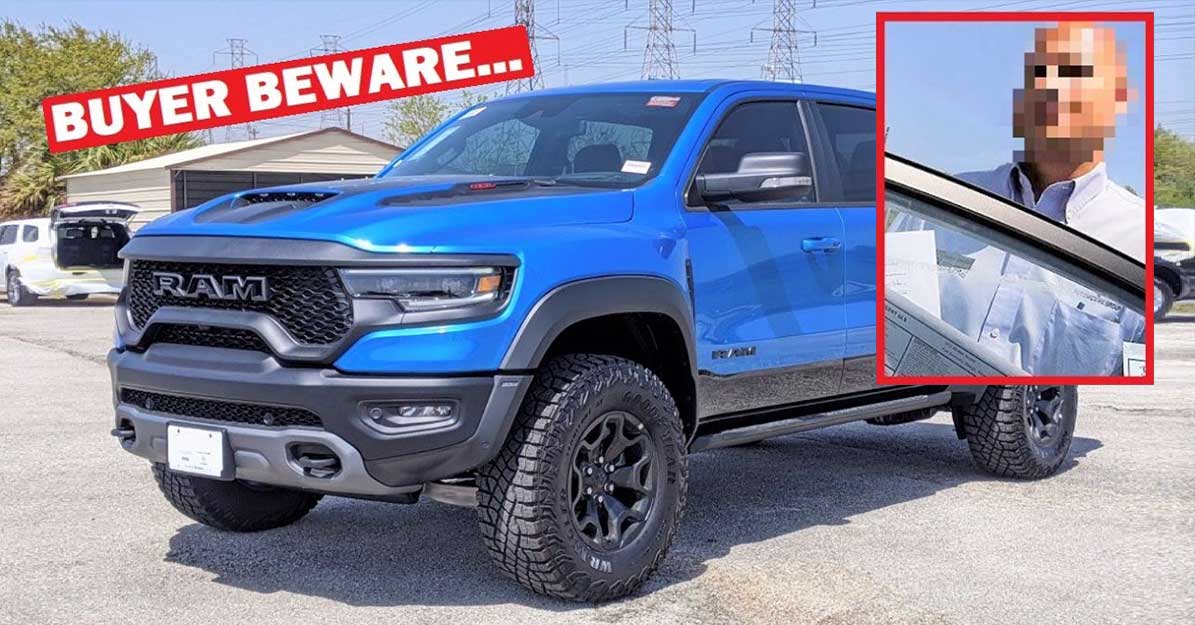 If we’ve heard it once, we’ve heard it a million times. Car dealerships as a whole can really have a reputation of being a little bit shady. The industry is truly cutthroat and lots of folks behind the scenes will do whatever it takes to make a few bucks, screwing over customers and simply living without a conscience in the process.

This time, the target of some underhanded activity would be none other than a YouTuber by the name of Mike that we all know as StreetSpeed717.

In this particular occasion, the creator in question was trying to buy his third Ram TRX. We’ve watched him purposely destroy one before but this particular example was slated to become his daily driver. He promised us that there would be no drama when behind the wheel.

For those who aren’t familiar with how the TRX is selling right now, lots of dealers are attempting to sell them for over MSRP. We can’t really necessarily say that we blame them because if people are willing to pay it then that’s what the market is going to bring so why not upcharge?

The part where it becomes a little bit sketchy is when they start playing games with the price. Either you’re going to pocket $5000 over MSRP or you’re not. When the games start is when things get truly frustrating.

So how does this apply to our host? Well, eventually, when searching for his new daily driver, Mike would end up finding one that was 250 miles away from where he lived in Ohio. As he found exactly what he wanted and the asking price was at MSRP, it was a bit of a surprise so he decided to hop on the deal.

Mike would send over all the pertinent information like his driver’s license and insurance to the dealer along with a $1000 deposit. He had planned to hop on an airplane and fly out the next morning with a certified check which is what the dealer wanted. However, he found a bit of an issue when he went to get the check. When Mike called the dealership several times in order to figure out the exact amount that the check needed to be for, there was no answer.

Eventually, the dealership does answer and the excited new TRX owner is told that somebody came in and purchased the truck and that he was basically out of luck. That in and of itself seems like a pretty big scumbag move by the dealer whose name wasn’t disclosed in the video. What makes matters even, though, is when our host discovered that the exact same truck was listed again after the whole debacle for a higher asking price.

When dealerships wonder why they have a bad reputation, we think that we can point to situations like this.

« Is the 2021 GMC Denali Carbon Pro Edition the Best Luxury Truck For the Money?