Farmtruck and AZN Take us to Farmageddon, Visit the Troops! 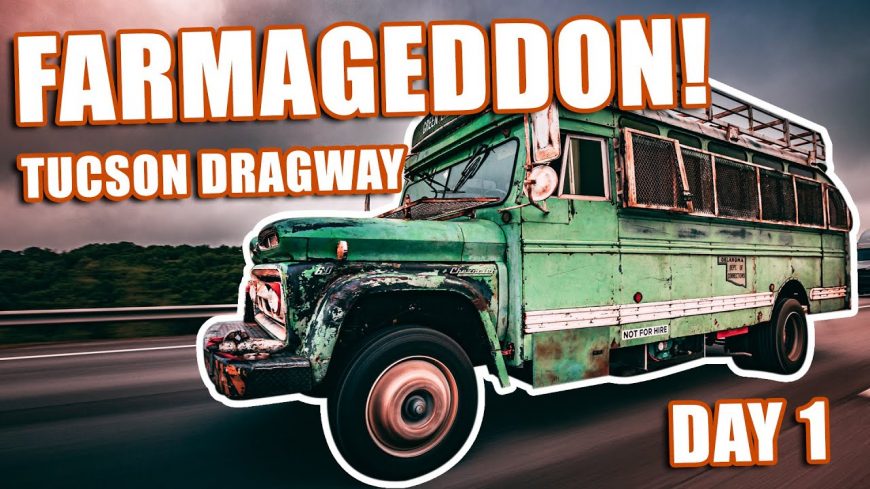 In mid-November, Farmtruck and AZN would host an event by the name of “Farmageddon” with the main idea being to bring out the best daily drivers that the area has to offer.

The event would host classes that range in everything from Power Wheels and RC Racing all the way to a Daily Driver Duel and Mini-Van Mayhem Class. It seems like Farmtruck and AZN are out to prove that you don’t need a big dollar drag car or even a brand new sports car to go out and do a little bit of racing. Instead, it’s a sport that just about anyone can join in on.

This time, we get to ride along with team FNA as they get ready to take on the event in Tuscon. As is usually the case, though, it’s not a Farmtruck and AZN video without a little bit of a curveball here and there.

Coming along for the ride this time, we find not only the bright orange Farmtruck but also the crew’s prison bus project. As it turned out, the prison bus ended up needing some repairs on the side of the road. This is when the creativity of FNA really shined as they fixed the issue on the side of the road using the help of a twig to make sure the bus could get to where it needed to go.

In addition, we get to follow along as FNA heads to a local military base so that the crew can show their appreciation. During the visit, the military personnel got to check out the prison bus and Farmtruck and AZN took the chance to browse some of the toys that the military gets to play with.

By following along with the video below, we get to witness day one of Farmageddon. Stay tuned as there is much more action coming from the event!

« He Sent A Brand New Porsche Through Dealership Window