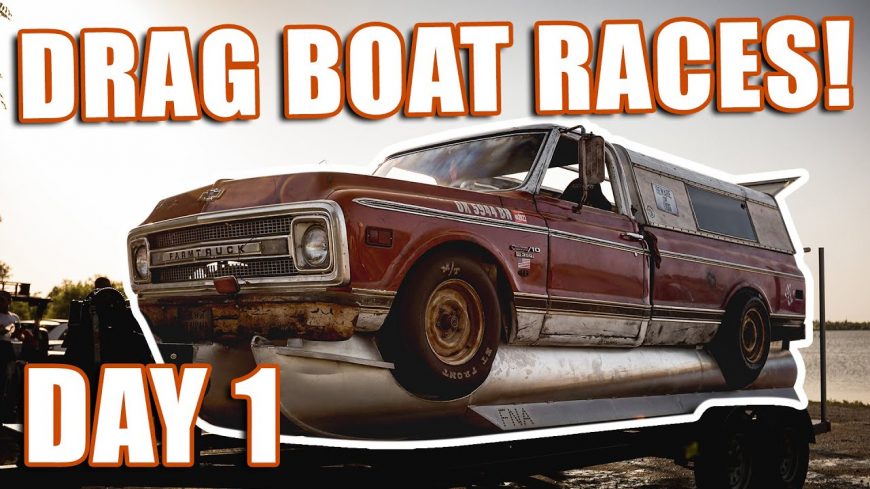 Farmtruck & AZN have definitely become known for creating some of the wildest machines in the streets. We would be lying if we said that we didn’t have fun watching their creations come to life. Whether it’s the OG Farmtruck or something like the more recent “Dung Beetle,” we can’t help but wonder what these guys are going to come up with next.

The most recent rendition of an FNA creation is known as the “Farmboat.” Up top, this thing looks pretty familiar as it borrows the body panels from a Chevrolet C10 just like the original Farmtruck. In fact, the patina and all have been placed on the shell to make it look exactly like the original Fartruck.

However, this isn’t a truck at all!

Instead, the Chevrolet body is sitting on a couple of pontoons that are hooked up with quite the potent engine combination in order to make something fun for the water. I don’t think it’s too far-fetched to say that this is probably the most eye-catching thing that we have ever seen float.

In their most recent outing, Farmtruck & AZN head to Smoke on the Water to participate in some drag boat races. In the feature from day one of the event, we get a pretty good look at what we can expect from the Farmboat. Not only that but we get to ride along, seeing this thing in action from the inside of the cab for the first time as well.

While this was definitely a special event, we will get to see even more of this wacky creation and certainly others when Farmtruck and AZN hit Discovery Channel with their new self-titled show, “Farmtruck & AZN.” Check Discovery Channel or Discovery+ for reruns of the two-hour premiere that launched this past Monday.

The rest of the show is slated to run weekly at some point around the beginning of the new year.