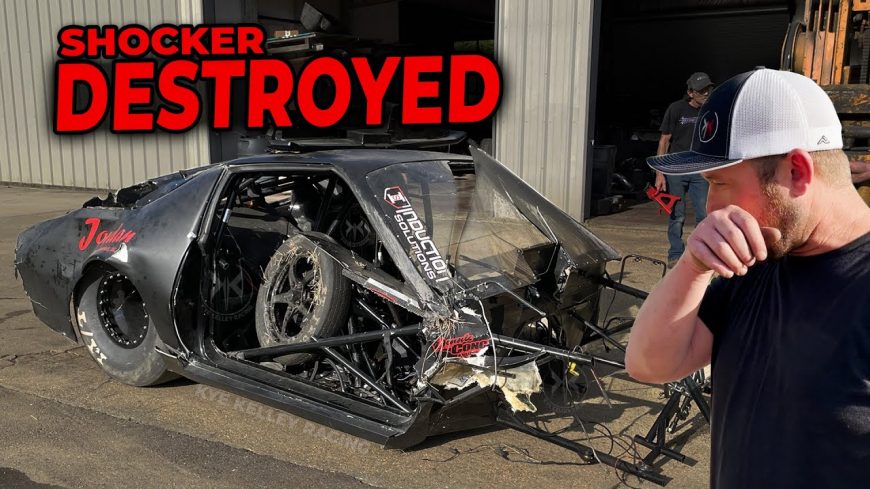 If you go fast enough for long enough, there’s a good chance that you’re going to end up getting into some sort of an accident eventually. One can only hope that if that moment ever does come that the damage is as minimal as possible, hopefully with everyone escaping without injury as well.

Unfortunately for Street Outlaws regular, Kye Kelley, that wasn’t exactly the case as his infamous “Shocker” Chevrolet Camaro ended up going down in a blaze of glory. Fortunately, everybody did end up walking away from the incident. However, Shocker will not be racing again unless Kye takes on one of the most insane revival efforts that we’ve ever seen which seems pretty doubtful.

Kelley hopped on YouTube to tell us the story of what exactly it was that happened to the car and how it got all wadded up. Apparently, Kelley wanted to lend the car to a friend of his to help with a racing effort. However, when push came to shove, the transition of drivers didn’t exactly go as easy as Kelley thought they would go.

Instead, he attributes the crash to a lack of preparation.

When handing over the controls to the new driver, Kelley says that they didn’t test on the racing surface or even walk the road that they were racing on to see what kind of condition it was in.

When it was already too late, the crew finally discovered that there is a little bit of dew covering the surface which made it too slick to race on. Naturally, this meant that when the car hit this slick surface with all of its power, it would be sent sideways and off of the road where it would flip end-over-end twice and roll over sideways 4 times.

According to Kelley, the Shocker is a total loss. Furthermore, he doesn’t blame the driver for the situation as it would’ve been nearly impossible for any driver to combat these conditions.

Even though this is a devastating situation, hopefully, Kelley can chalk this one up to an expensive lesson and move forward.