Ride Along as the ABSURD Vengeance Racing Viper Takes a Shot at 6s in the Quarter! 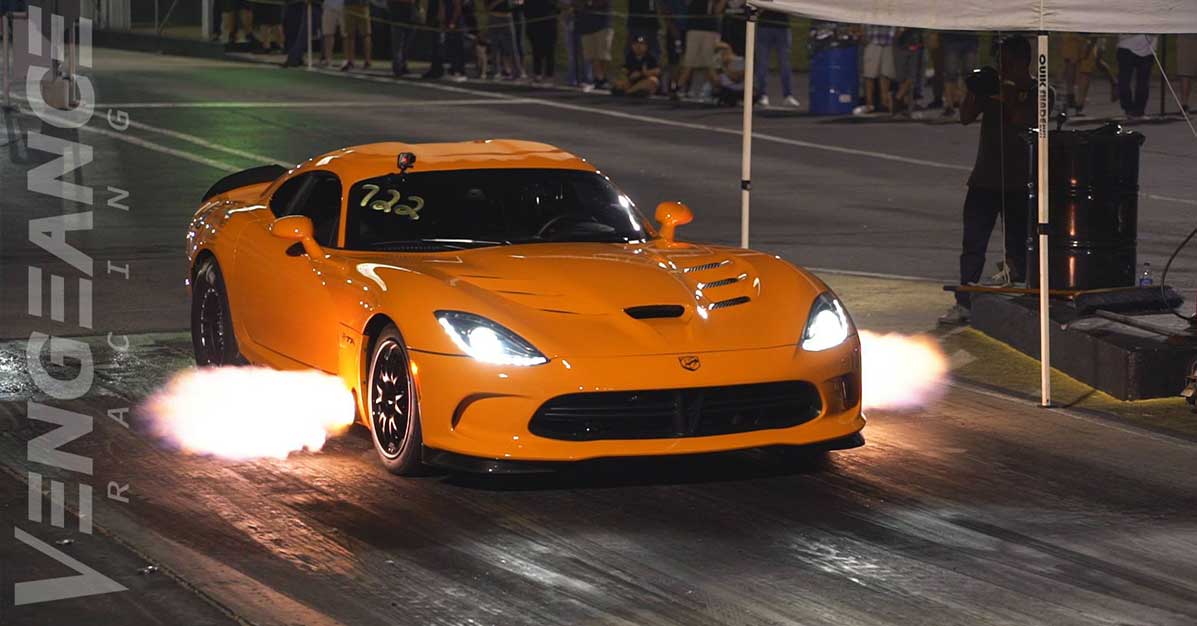 Ned Dunphy is a bad, bad man, especially when he’s behind the wheel of his Vengeance Racing built SRT Viper.

Those familiar with the bright orange Viper, know that this thing is serious and this time, Precision Turbo & Engine, brings us the action as the monster hits the lanes at TX2K.

For those not familiar, the build started out as a 2014 Viper TA. When Ned Dunphy took his car to Vengeance Racing, he told him that he wanted 1000 hp and to shoot fire out of the exhaust. Vengeance didn’t seem to have an issue with this as they would quickly turn the road racer into a drag racer with a pair of Precision 68 mm turbos to really make a little bit of steam.

Before long, though, this car that was turning heads left and right seemed to be something that Dunphy wanted to get just a little bit more out of. In order to get more, those 68 mm turbos were abandoned in favor of 76 mm turbos. Eventually, even the 76s felt like they weren’t enough which would lead us to the current setup as the car has a pair of Precision Pro Mod 94s.

The can has also undergone a swap that left behind the manual configuration in favor of an automatic which allows her to get down the track a little bit more quickly. Even though the car is an auto right now, it still currently holds the stick shift Viper record.

This time, we check in with the car in Texas as it makes its presence felt, as always. The orange Viper has certainly managed to knock home a lot of milestones. The one that is next on the radar is the six-second range. Ultimately, Dunphy and Vengeance would like to compete with Sal Patel to make the fastest Viper ever. Patel has a long-standing record in the 6.90s.