Tesla Plaid Lines up With Corvette ZR1 at the Strip 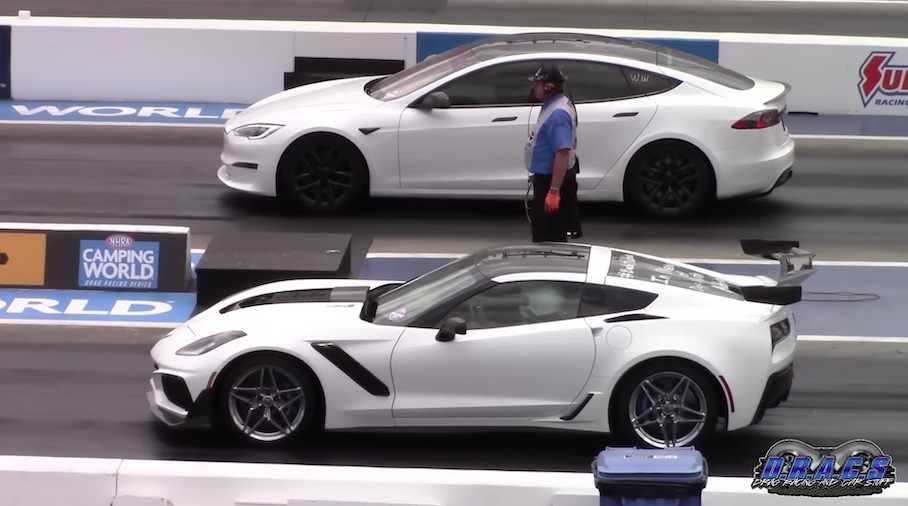 Whenever we see new technology drop that seems to make a particular combination faster than everything else, we can’t help but want to see it go head to head with just about every ride imaginable.

In this particular case, the tech just so happens to come in the form of the Tesla Model S Plaid. For those who haven’t had their eyes on drag racing record books, the electric vehicle has managed to set its roots as the quickest and fastest car to ever make its way down the quarter mile, surpassing every high-dollar mass-produced car that the world has ever seen.

When we see the Model S Plaid line up with the likes of a Chevrolet Corvette ZR1, it isn’t if the EV is going to manage to pull out a win but instead by how much. In this particular case, we get to see exactly what the damage is as the electric vehicle lays down the law.

Not only do we get to see how the Plaid goes head to head with the Corvette. We also get to see The EV as it takes on a Ford Mustang that sounds like it has a healthy little turbo surprise under the hood as well.

Down in the video below, we get to see what might just be the future of performance. The most interesting part about something like this is that electric vehicles are very much still in their infancy. If they’re setting records now, imagine how these things are going to be performing 10 years from now. I don’t exactly have a crystal ball but if I did, I would probably guess that top-tier EVs are going to be much faster at that point in time. Who knows, it might not even be long before we end up seeing one of these electric vehicles pushed into the 8-second quarter mile range!