Travis Pastrana Goes for His Top Fuel License With the Help of Alex Laughlin, SPR 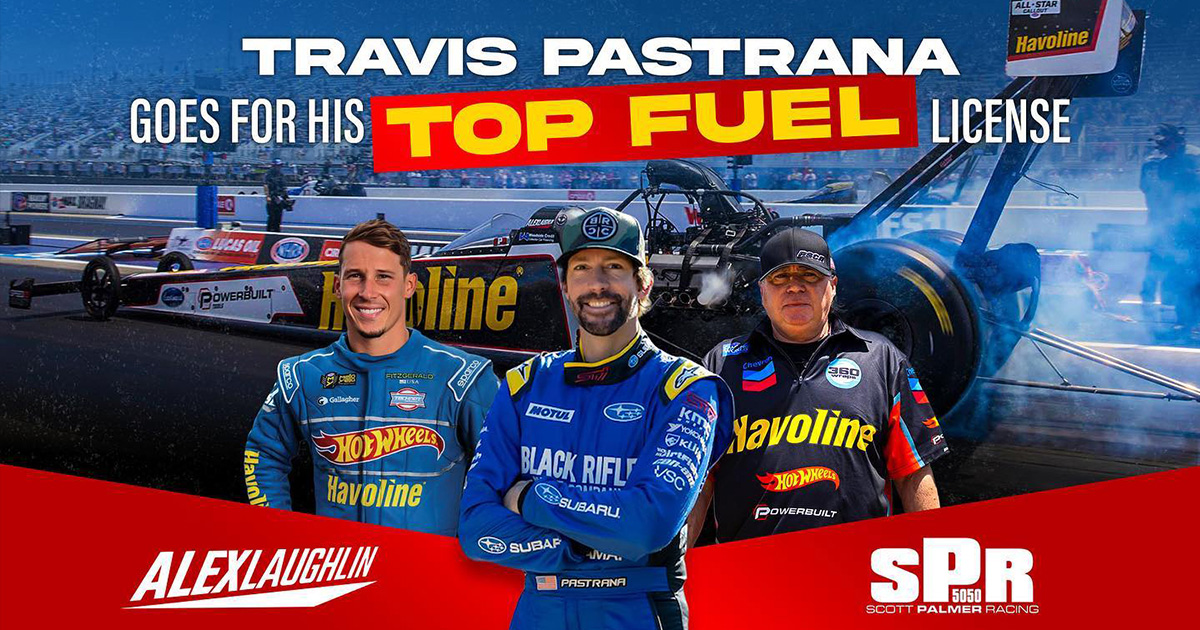 When it comes to the wonderful world of motorsports, Travis Pastrana is one individual who has pretty much seen it all. Fans likely know him best from his ventures in extreme motorsports. His hit television show, Nitro Circus, put together an “action sports collective” led by Pastrana. Fans would watch as the show exhibited Pastrana and his friends doing just about everything they could to create an adrenaline rush.

Others might know Pastrana for his work behind the handlebars of a dirt bike, experiencing great success in motocross and at the X-Games alike. As if that wasn’t enough, the adrenaline junkie has also had a stint in NASCAR and is revered for his skills behind the wheel of a rally vehicle, too. This list doesn’t stop there as we have to say he’s simply done too much to list in this article!

Fast forward to 2022 it looks like Pastrana is ready to cross yet another form of motorsport off of his bucket list. This time, he hops behind the wheel of a Top Fuel dragster with the help of NHRA star driver, Alex Laughlin. Monday, Pastrana will be going for his top fuel license, something that Laughlin says he’s been helping put together for over a year now.

In a post on Facebook, Laughlin tells us that Pastrana will be hopping behind the wheel of the Top Fuel car that Laughlin normally pilots.

Laughlin said in the post, ” I was able to express to Travis that he can’t have a show called “Nitro Anything” unless he has first-hand experience of what nitro is all about.”

Therefore, today, Pastrana will realize the opportunity to go 300 mph. Even though the action sports star has been tied up in some pretty crazy motorsports adventures, we’re pretty sure that this is going to mark the fastest that he’s ever been while behind the wheel of something that has tires on the ground. Laughlin, who broke into NHRA’s pro ranks in the Pro Stock class, thanked Scott Palmer “for letting me pimp out his Top Fuel equipment! This is not only good for both of us, but it’s great for drag racing as a whole! Hey TP, let’s roll!!”