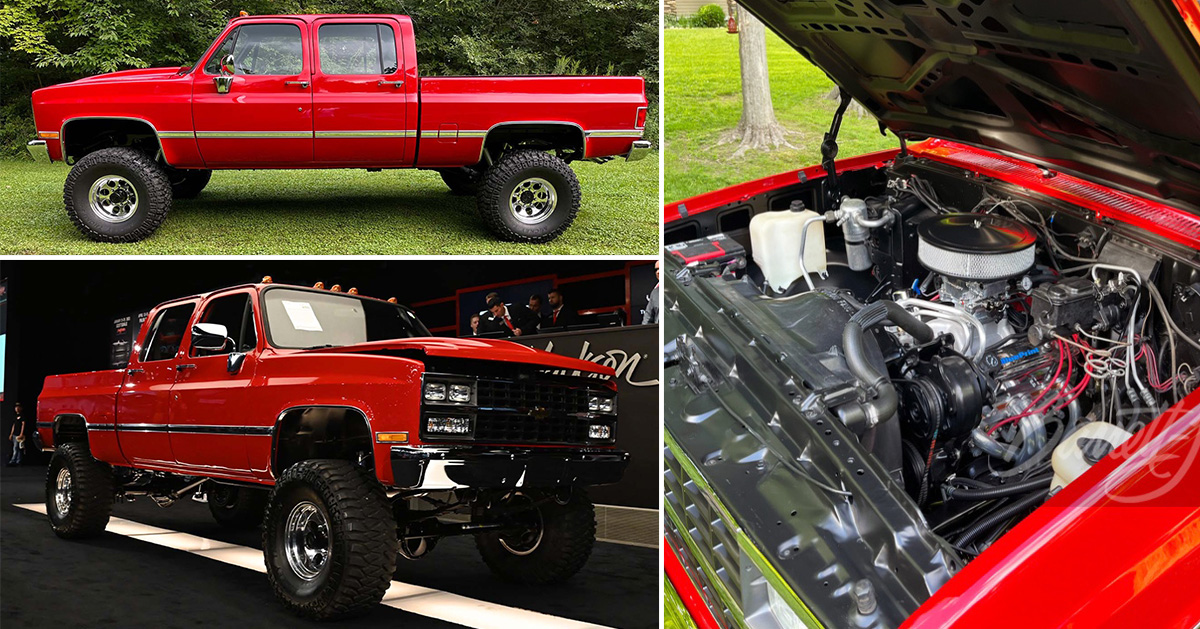 It’s always interesting to watch as time marches forward and the market determines what classic automobiles are worth big money and which ones are more or less forgotten about. Recently, some bidders at the Barrett-Jackson Auto Auction put their money where their mouth was and propelled a 1990 Chevrolet 3500 Custom pickup truck to the world auction record of $110,000 at Barrett-Jackson’s Houston Auction. The post from the auction house didn’t specify which record but a little deductive reasoning leads us to believe that the record was for 90s pickups.

The crew cab short bed pickup truck is fully restored, a process that its listing says took a year to complete with a frame-off restoration.

Under the hood, we find 396 cubic inches of Chevrolet small block power from Blueprint Engines. The ad says that the combination makes about 491 hp along with 513 foot-pounds of torque.

The wild part about the final hammer price on this bad boy is that the truck is relatively custom. Generally, record-setting rides seem to be the ones that remain in factory showroom condition. In this example, though, we check in with a truck that has a lot of aftermarket features from a 6-inch ORD lift kit to an interior with a custom dash and reconfigurable digital gauge cluster. Most of what’s under the hood didn’t come from General Motors, either.

What we can say, though, is that the restoration here definitely was done tastefully. There’s nothing too extreme about this truck and the work appears to be top-notch which really seems to be what has brought the price into the six-figure range. In any case, the buyer of this one bought themselves a pretty awesome piece of automotive history that is in great condition and ready to ride.

After seeing a pick up truck from the 1990s reach the six-figure range, we can’t help but wonder what’s coming next in terms of a value boost. As much as it might make some of us feel old, we would have to imagine that there are some cars and trucks from the 2000s coming next.

« This Kia Will Blow the Doors Off Your Camaro, Mustang, or Challenger