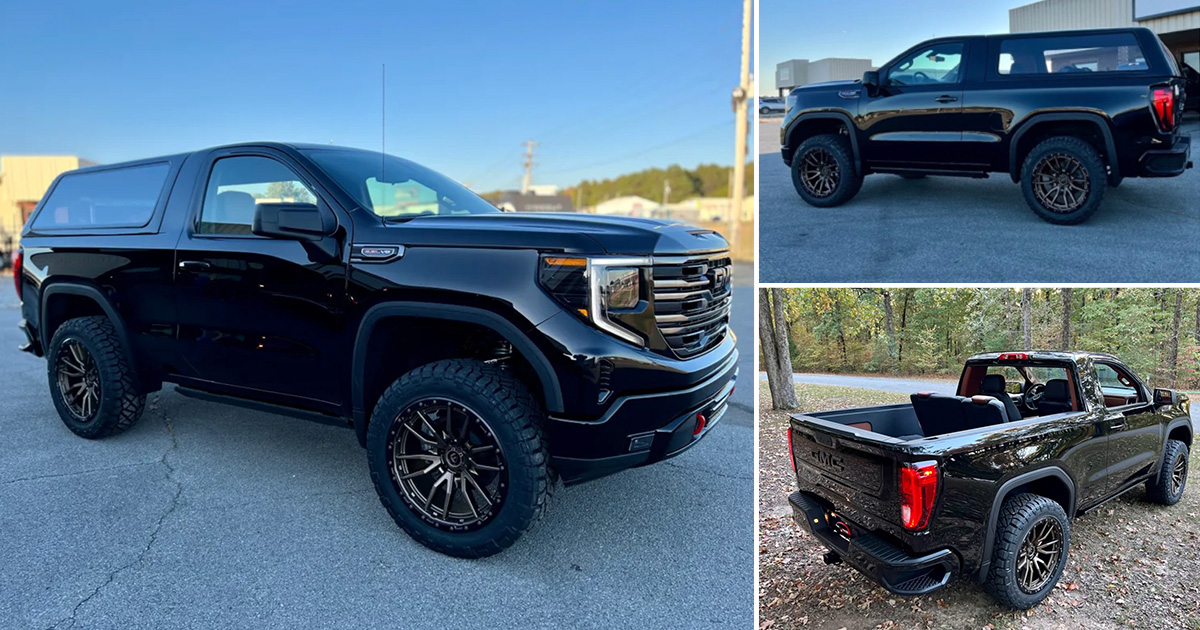 Long gone are the days when one could pop the top off of the back of their brand-new SUV and turn the truck into a convertible… Or are they?

Custom car builder, Flat Out Autos, has put together a combination that can bring this nostalgic vibe back to life once again. Debuting at the SEMA show this year, people will be able to lay their eyes on an unofficial 2022 GMC Jimmy that looks like it almost came straight from the assembly line.

In order to get to this two-door SUV with the top that comes off just like the old days, the company starts out with a 2022 GMC Sierra single cab, long bed. After shortening the frame and modifying several other parts, the wheelbase starts to come into focus to look like the old-school full-size Jimmys and Blazers of the 1980s.

Apparently, the corporate side of General Motors has deemed that a two-door SUV isn’t something that they’re going to sell enough of to justify its position in their official lineup. However, with aftermarket companies like Flat Out Autos, the combination that fans have been begging for comes back, and at a relatively reasonable price, at that.

Via The Drive, we learn that these bad boys are going to start at a price of $130,000. Sure, that might seem like a nice chunk of change and it definitely is. However, when compared to a brand new Chevrolet Tahoe or GMC Yukon that would be priced at about $90,000 fully loaded, the price tag seems justifiable for a bespoke, one-of-a-kind machine like this. Besides, can you really put a price on the fact that you’re going to be the only one out there rolling around in a brand new two-door SUV? This modern take on a classic icon is certainly going to turn heads everywhere that it goes.

For those looking to get their hands on one of these bad boys, the model shown in the pictures and the video below has already been spoken for along with six others. However, the shop will be building 25 more in 2023 which will be up for grabs.