Diesel vs Electric Tug-of-War: Ford F-150 Lightning Takes on the Ram 2500 Cummins In a Nail Biter! 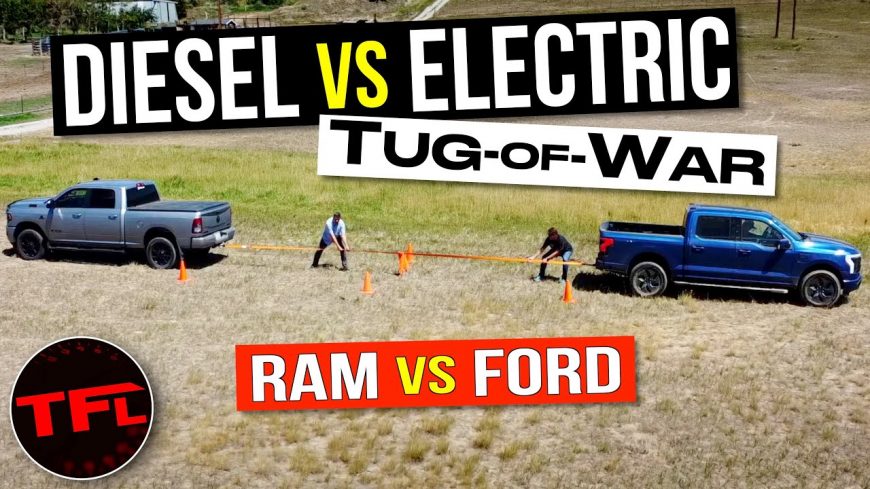 If you want to start an absolute battle among car enthusiasts over the dinner table this holiday season, bring up the topic of electric vehicles. At the mere mention of electric-powered vehicles, there are sure to be a variety of different opinions on the matter and lots of strong ones at that.

One of the most “hot button” topics in the world of electric vehicles these days that of towing capability. As history has shown, diesel powered trucks have been the long-standing most reliable towing option. Naturally, not only can they pull a ton and do it pretty efficiently but they can be refilled at diesel pumps all around the country in a snap.

Electric powered trucks, on the other hand, while they have shown an ability to pull big loads, their battery range has been brought into question. Of course, when a battery drains, it’s not as simple as filling it up in a few minutes at the gas station. Instead, the batteries that drain pretty quickly while pulling a load will take a little bit of time to charge back up.

This time, thanks to The Fast Lane Truck, we get to check in with a diesel versus electric towing competition.

While the tug-of-war isn’t exactly something that’s going to prove all that much that can translate into real-world results, we have to say that the bragging rights here are absolutely huge. This test might not be the most functional but when it comes to going head-to-head and having pure competition, it doesn’t get much better than this.

As we dial in with the video below, we get to see how a couple of different pickup truck options compare to one another. Not only do we get the diesel and electric powered variations but a gasoline powered truck is also thrown into the mix for good measure.