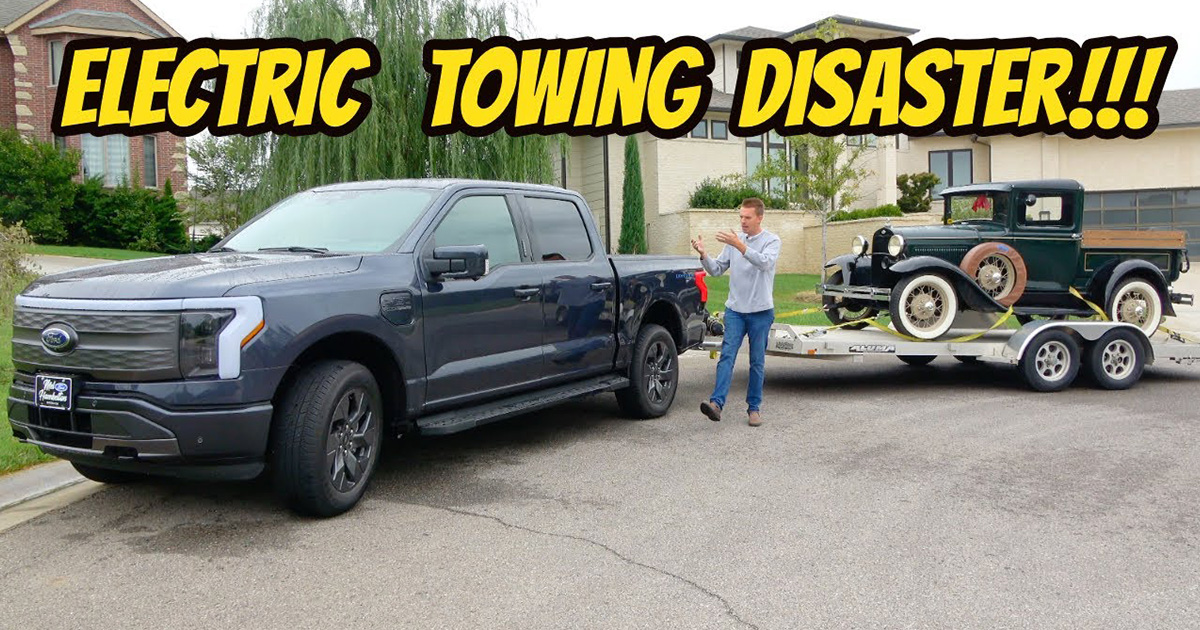 On the surface, electric vehicles are capable of doing some pretty amazing things. Just look at something like the Tesla Model S Plaid, a car that was released for the 2022 model year and, in one fell swoop, went down the drag strip and became the quickest and fastest production vehicle in existence, outrunning everything from Chevrolet to Lamborghini and everything in between.

When we swing over to the electric truck segment, there are also some pretty stout promises. For example, with the newly released Ford F-150 Lightning, promises of up to 10,000 pounds of towing capacity with a light-duty truck are simply astounding. However, as the details work themselves out, some Lightning owners are finding out that all that glimmers isn’t gold.

This time, we check in with YouTube creator, Hoovies Garage, who does a little bit of a towing test with his 2022 Lightning.

The truck in question is hooked up with a standard range battery and the Lariat luxury package. While this battery package doesn’t promise the 10,000-pound towing capacity of the top tier truck, this model is supposed to be able to pull along 7700 pounds comfortably. It’s also supposed to offer 230 miles of range.

Let’s just say that this 230-mile range goes down quite a bit more than one might think when pulling behind even a light load.

The test demonstrated by Hoovie was to take two trips that total 128 miles. Having the truck charged up for 200 miles, our host says that he was pretty confident that he would have more than enough juice to account for a margin of error as well. During this 128-mile test, half of it would happen with an empty trailer and the other half with a lightweight vehicle loaded up.

When push came to shove, about 90 miles of battery range would be drained in just about 30 real-world miles, creating quite the inconvenience.

This isn’t exactly the first that we’ve heard about the Lightning having some pretty poor towing range. Among the litany of reports and owner posts on social media, Car and Driver ran a test saying that the reported 230-mile range would be limited to 100 to 125 miles with a modestly sized load, depending on which battery package the truck is equipped with. Based on this particular test, we would say that those numbers are probably pretty generous.

In the video below, we get to see all of the details about how this test came together and how the owner of this particular Lightning feels about his truck. Needless to say, while the driver says that the tow is rather effortless, even with a load on the back, it seems as if the range is quite a limiting factor.