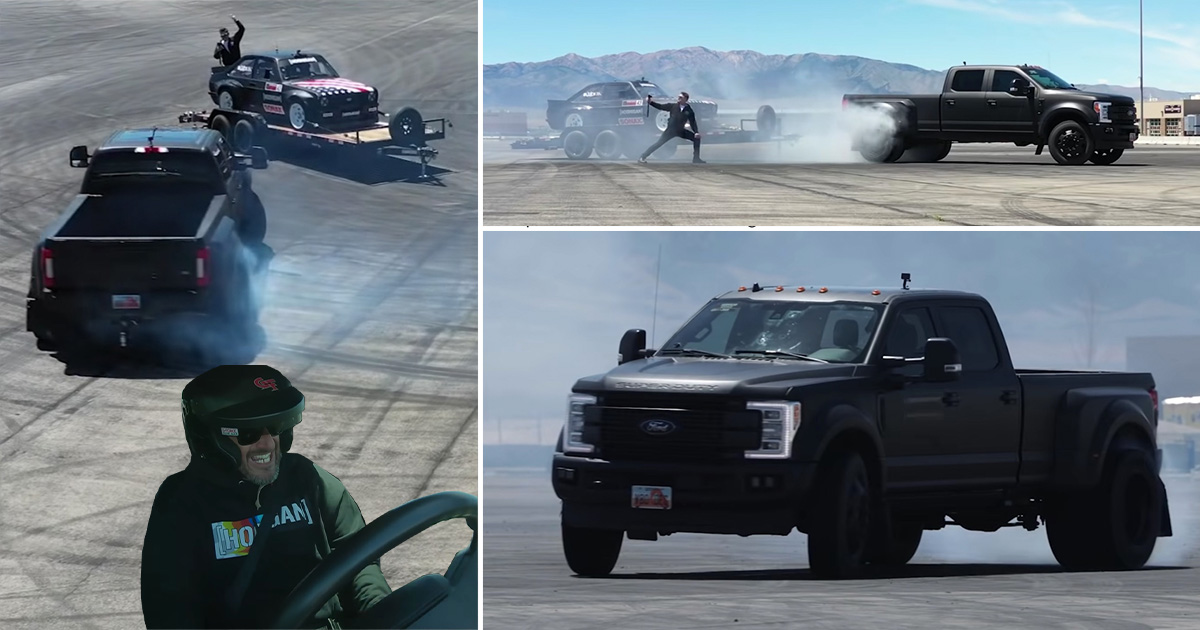 If there is a vehicle and it can be drifted, there’s a good chance that drifting extraordinaire, Ken Block, will do it or maybe even has done it at some point in his illustrious driving career.

Typically, we see the sideways sliding driver behind the wheel of something insane like the Hoonicorn Mustang putting down 1,400 horsepower or one of his wild rally machines. This time, though, the vehicle that Block is behind the wheel of isn’t breaking the internet, at least not on its own. However, when Block sprinkles his driving talent into the mix, perhaps this heavy-duty rig with tons of muscle will have what it takes to break the internet after all.

Complete with a 35,000-pound towing capacity and 935 pound-feet of torque, this Powerstroke diesel-powered Ford F-450 was built to, well, not drift. Instead, obviously, this truck was designed to do whatever job one puts in front of it whether it’s pulling around a bunch of rocks in the bed or slapping a piece of heavy equipment on a trailer and yanking it up a hill.

When Block saw this thing, though, it seems as if, in his head, he saw the 8000-pound monster of a truck sliding sideways.

Down in the video below, we get to join in with the process that one might go through in order to try such a crazy sequence of events. The video starts out with a little bit of modification talk in regards to how to get the braking system to be able to accommodate drifting. It ends with watching this monstrous truck slide around a skid pad in a way that we aren’t too sure many folks thought possible.

Even though a truck like this makes a ton of power, it certainly doesn’t look easy to be able to get it sideways and keep it that way. With someone like Ken Block behind the wheel, though, it certainly seems as if that near impossibility becomes a reality.