Meet the Man Behind the “Jet Ski” Scooter

Meet the Man Behind the “Jet Ski” Scooter

With the right set of wheels, standing out from the pack is definitely something that ...

With the right set of wheels, standing out from the pack is definitely something that can be accomplished. However, being able to get there is a little bit easier said than done. In the landscape of automotive modification these days, being able to build something on a budget that really makes eyes pop from skulls certainly takes some vision.

For one Florida man, though, he had just that vision that was necessary in order to take his ride to the next level. Apparently, when this individual saw the likes of a jet ski built for the street on social media, he decided to hop into the project and create his own. As it turns out, this ski rider’s version also went incredibly viral. Pretty much anybody who lays eyes on this thing will probably think that it’s neat enough to pull out a camera and take a couple of quick clips to post to the social media account of their choice.

After going viral, a local news station caught up with the Florida man to ask the creator of the bike a couple of questions. After asking the man about the build, we find out that it wasn’t all that expensive and actually incredibly simple. The process involves taking a scooter and a jet ski, cutting a hole in the bottom of the ski, and plopping it on top of the scooter. The result is something that absolutely will draw a lot of attention.

By following along with the video below, we get to see, up close and personal, as this custom build has come to life. Unfortunately, with a massive hole in the bottom, this jet ski won’t be able to see the water anymore. However, we would say that it has been reborn to a different purpose that is also pretty darn cool.

Jetski Gets Sent! He Jumped Right Over the Road With It! 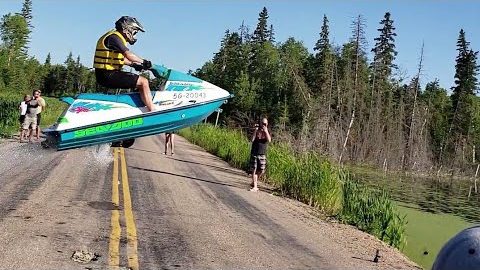