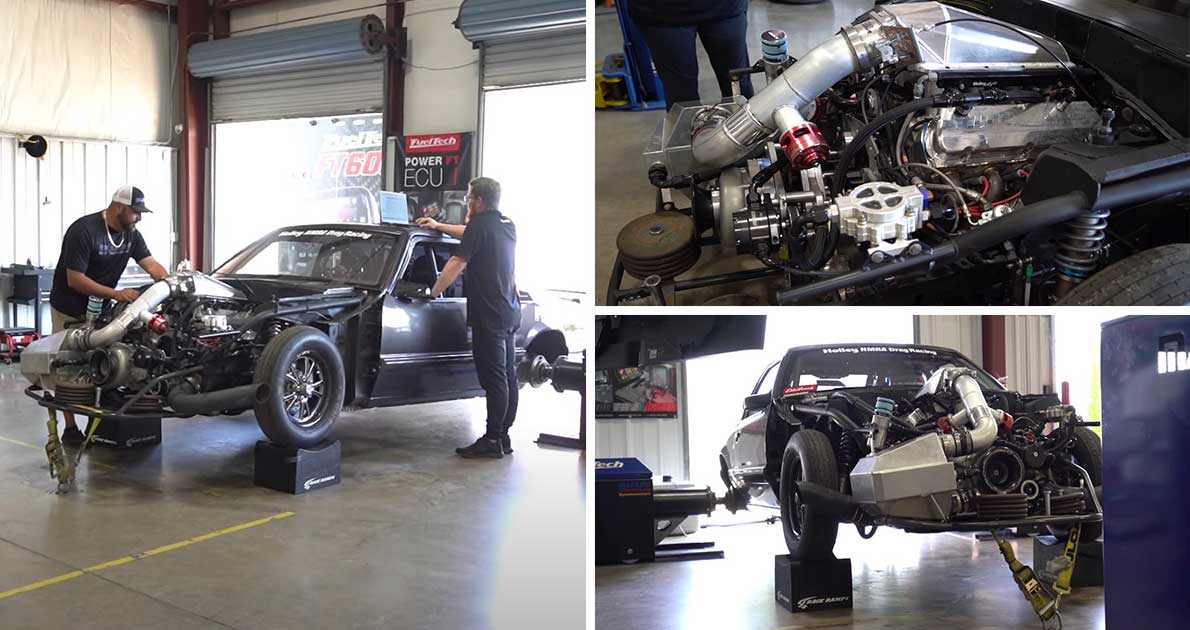 Sometimes, it’s all about ironing out the tried and true. The Ford Mustang Fox Body is nothing short of a staple of the drag racing community. In fact, we would wager that they’re likely the most popular car at a variety of competitive straight-line competition. Let’s just say that there’s a good reason for that and that a well-done Fox is most certainly going to be hard to beat.

This time, we check in with an amazing machine as it hits the hub dyno at FuelTech. We’ll allow them to take over from here. The team at FuelTech always has the best inside info that gives us an idea of how some of our favorite machines function which generally includes a list of FuelTech parts that always seem to make going out and getting that reliable horsepower a bit more obtainable.

FuelTech tells us, “Last year, Spina converted to a FuelTech FT550 engine management system to gain better control over his powerful Bennett Racing Engines U400 small-block Ford combination. He worked with FuelTech’s industry-leading tech support to get the vehicle running strongly, but decided he needed that little extra edge to fight the fierce competition in 2021. Spina stopped at FuelTech USA’s headquarters in Ball Ground, Georgia on his way to an NMRA National event to find that little bit of extra power lurking in the combination. The FuelTech team bolted his Fox Mustang on their in-house Mainline Hub Dyno to make baseline pulls and start pecking away at gaining more. By the end of the day the engine was cranking out 1,733 rwhp, sending a clear message that the competition better be ready!

The FT550 and its siblings—FT600, FT550 LITE, and FT450—are an all-in-one solution with standard features such as sequential injection and ignition, O2 closed loop, Data Logger, Delay Box, Boost Controller, Nitrous Controller, and much more. The ECU box doubles up as an LCD display and touchscreen showing real-time data and allowing the user to make adjustments without a PC connection. Not only does it display the real-time information from the assortment of sensors wired into the system, all PowerFT ECUs are capable of data logging each sensor and eliminates the need for an additional system to be built into the vehicle.

The supercharged small-block Ford’s air/fuel ratio is carefully monitored by a WB-O2 Nano, which utilizes a Bosch LSU 4.2 sensor. The unit is connected to the PowerFT engine management system through a CAN connection and a reasonably sized digital readout is compact enough to mount in an assortment of areas. Spina mounted his on the dashboard to have an easy-to-read data display. Additionally, the complete ignition system is sourced from FuelTech including the powerful FTSPARK-8 Gen I, which is currently superseded by the FTSPARK-8 Gen II that features up to 750mj of ignition! All FTSPARK Gen I boxes can be updated to Gen II specs.

FuelTech PowerFT engine management systems offer extreme flexibility to build the system bigger over time, adding more functions and data channels. Recently the company released its Input Expander module. It allows 24 additional inputs for your PowerFT ECU, creating the ability to run as many sensors as a record-breaking Pro Mod. The PowerFT ECU line-up is largely characterized by a total number of inputs to the control unit. The entry-level FT450 carries 7 input channels while the top-of-the-line FT600 offers 20 inputs. The new FuelTech Input Expander changes the game, allowing up to 24 extra inputs, including 20 analog inputs and 4 VR sensors. It brings the entry-level FT450 to a total of 31 input channels—that’s more than a standard FT600 engine management! And if you own an FT600, the additions are nearly endless with 44 input channels available.”

By following along with the video below, we get to really hear this monster roar to life. This is one that you’re not going to want to miss!